The day got off to a decent start: I was up early to finish packing and have breakfast before meeting my driver for my airport transfer. The driver, Andre, was very nice and friendly; we chatted quite a bit on the way to the airport. He had spent several weeks in the State - at Myrtle Beach actually - for a study program; he regrets that he didn't have the time or money to do more traveling in the States while he was there. We talked about my trip and also about his travels throughout Europe and Southeast Asia. It was one of the best transfers that I've had on this trip.

Upon arriving at the Minsk airport (a rather small airport, but quite nice) I was alarmed to see that my scheduled flight was not on the list of departures! I was flying to Tallinn via Kiev; my flight to Kiev was due to leave at 11:20 and the departures board listed flights through 17:00, but my flight was not among them. I found an information desk to ask for help and they were equally stumped as the flight number showed up in their system as departing at 17:20; they suggested I locate the ticket office, which was in some rather remote corner of the airport. As I was walking over there I checked my flight booking on Orbitz.com and found that the times had indeed changed! I never received a notification from Ortbiz and was quite upset, but happily the change simply pushed the departure back a couple of hours (not to the 17:20 flight).

However, I was now faced with the prospect of spending a much longer time at the airport than originally planned. Rather than sitting around wasting time, I decided to work and be productive (and also to earn some money to help fund this crazy trip); I've been utilizing my travel days as work days: it lets me put the time sitting around waiting to good use! ...a perk that I am thankful to have with my current job (and one that I know I won't have when I start a new job in Chicago).

During the check in process I met two very nice Mormon missionaries, one was from Bellevue, WA and the other was from Texas. They had been in Russia for nearly two years, but ran into some major issues with their visa and had just been deported from the country! The process had been quite extensive and the Church had covered all of the legal bills with their fight to remain in Russia, but now they were on their way to Ukraine to finish out the last four months of their mission. In typical Mormon fashion, they were upbeat and happy despite everything that happened. It was really nice getting to chat with some Americans for a little while.

During check in they were unable to print my boarding pass for some unexplained reason; I waited at the ticket counter for about 15 minutes before they told me that I would have to sort it out once I arrived in Kiev! The flight to Kiev was uneventful and once we landed I headed straight for the international transfers desk. To my horror there was no one working at the counter and no customer service people around to assist me. I paced around for several minutes before locating someone; she paged someone to come and help. Several minutes went by before a guy came out to the desk; he sat there chatting on his cell phone for a little while before helping me - only to tell me that I had to wait for my airline's representative to come out! Several minutes later she finally arrived and was able to print my boarding pass without any problems.

I rushed through the security check and to the gate, where I had about 20 minutes to spare before boarding began. The flight to Tallinn was quick and painless; arrival at the airport was a breeze and I was soon waiting at the bus station for the bus to the city center. The bus was packed on the way into the city, but for EUR 2, it is the cheapest and easiest way to get into the city.

After arriving at my bus stop I walked for about 20 minutes to reach my hotel. The walk was rather pleasant and the temperature was cool, which I enjoyed. The hotel is right next to the train station (my window looks out over the train tracks) and is quite nice, though not as luxurious as my hotels in Minsk or Moscow. Being so close to the train station may sound unappealing, but the area around the train station is rather nice, with a park right across the street.

There was a map of the city in my room that listed out several restaurants and bars to visit, in typical tourist fashion. One of them caught my eye: Katusekohvik, which isa rooftop cafe that also has hookah right in the center of town. I changed clothes and headed into town and was stunned by the beauty of Tallinn. It is the most European-feeling cities that I have visited so far, with only town walls surrounding it. The streets are cobblestones and there are quaint little restaurants and cafes all over the place.

When I reached Katusekohvik, I made my way to the hookah lounge where I was helped by one of the most attractive men that I've ever met! He was a little shorter than me, blond, muscular and had a killer smile. He spoke excellent English and recommended a local beer to have with my dinner of Schnitzel. The meal was filling and the beer quite good. 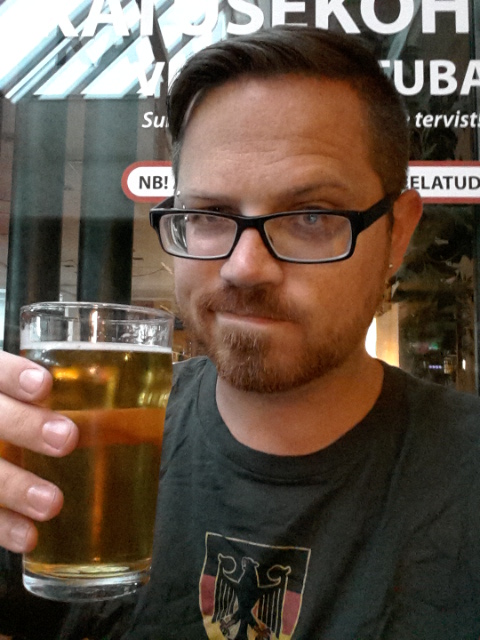 After I finished eating, I retired to a recliner chair next to a lamp to enjoy my hookah and read. I spent several hours there reading, finishing the evening having a cappuccino with my hookah. I finally left around 23:00 so I could return to my hotel and get some rest before returning to touring tomorrow. 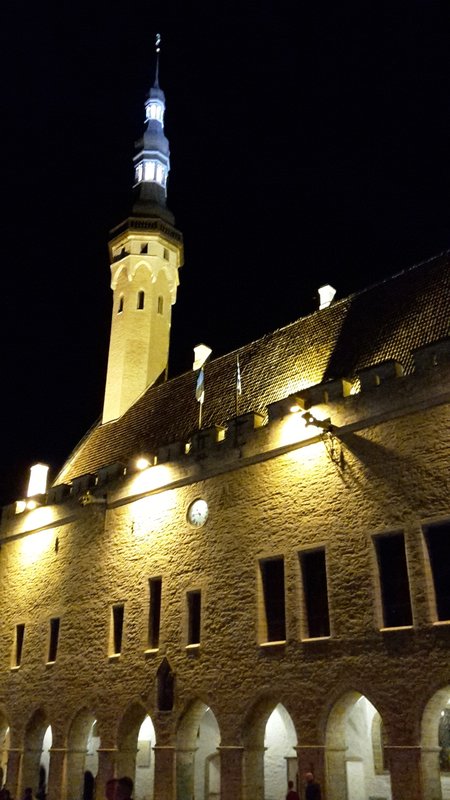 Sadly only the two pictures from my adventures today. I supposed I could have taken pictures of me being stressed at the airport... LOL

Posted by Glichez 13:05 Archived in Estonia