I got a bit of a late start to the day today as I finally got to sleep in on this trip. I relaxed at the hotel during the morning, meandered down to breakfast around 9. The breakfast buffet was rather large, though some of the hot items were rather rubbery from sitting in a warming plate for so long. During breakfast the TV was playing music videos and I was surprised to see Ricky Martin - who knew he was still recording music?!

Before I left to explore the city I discovered a company that does day tours from Minsk - and they have one scheduled tomorrow that I've been hoping to be able to do! The tour operators that I'd found prior to leaving the States were all private tours and were charging between $175 and $200 for the tour; this new company is only $50! I quickly contacted them to see if I could join the tour; we exchanged a few emails and soon I was signed up.

I spent the day wandering around the city to see the various sights that I'd researched during my trip planning; the entire walk around the city took about four hours. My first stop was Lenin Square, which was a massive area full of flowers and fountains, all focused around a large statue of Lenin. The statue was in front of what appeared to be a government building with a military guard pacing in front of it. I went to to make sure that it was ok for me to take pictures of the statue and thankfully it was (I'd seen warnings that Belarus was quite strict about taking pictures of government or military buildings and installations). 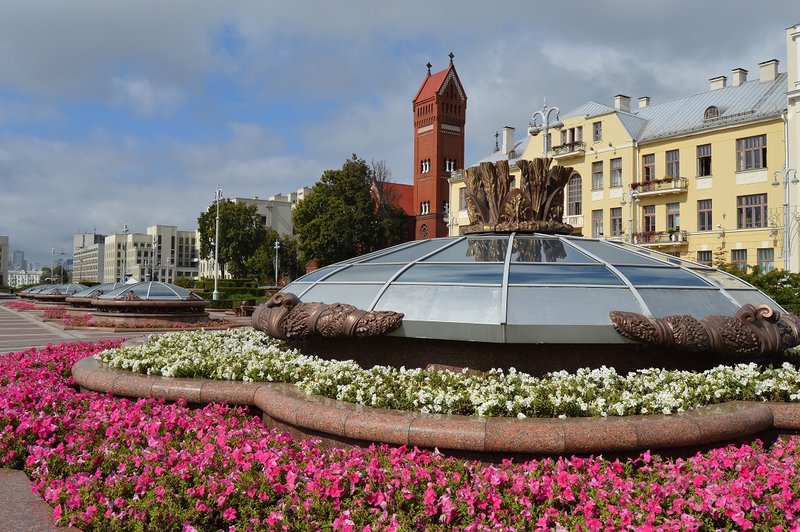 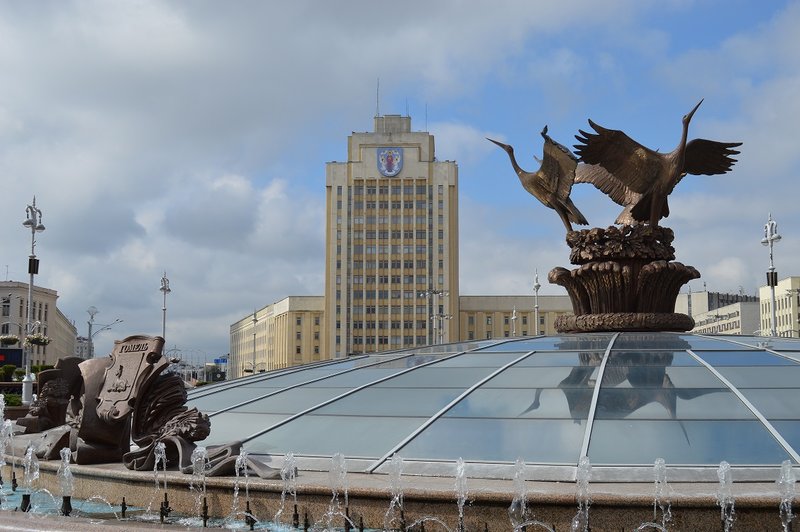 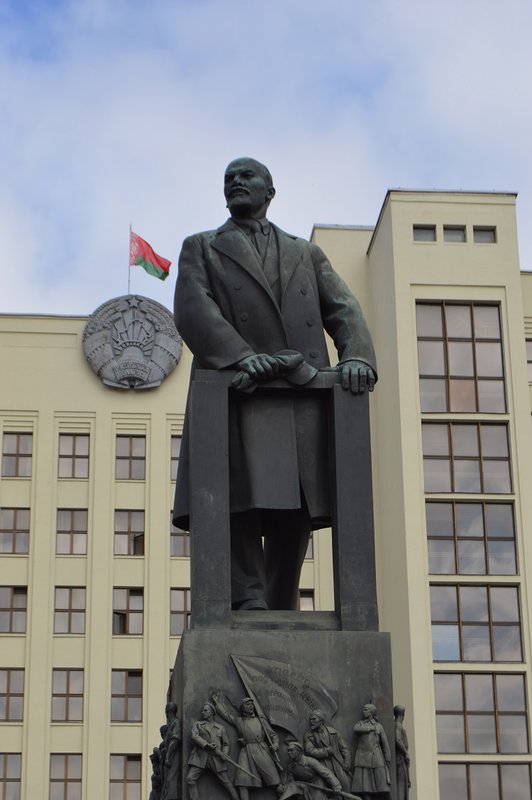 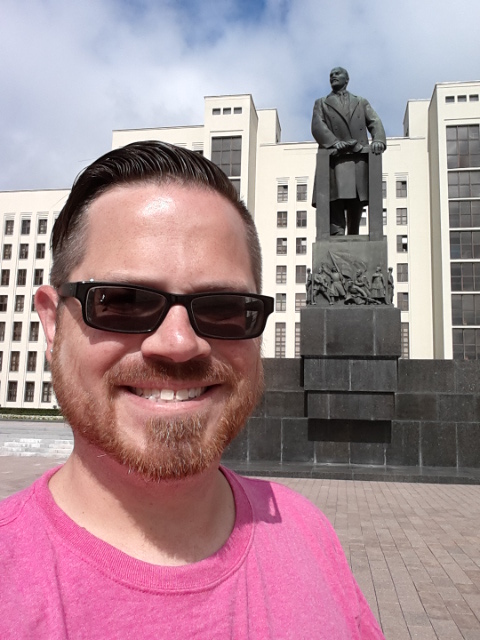 Right near the square was an interesting monument with a bell on top, along with several flags on display, among them that of the USA and Japan. Thankfully there was a sign in English that explained that the monument was in memory of both Chernobyl and the atomic bombs from World War II; in fact, soil from both Chernobyl and the New Mexico test site were placed at the site of the monument. 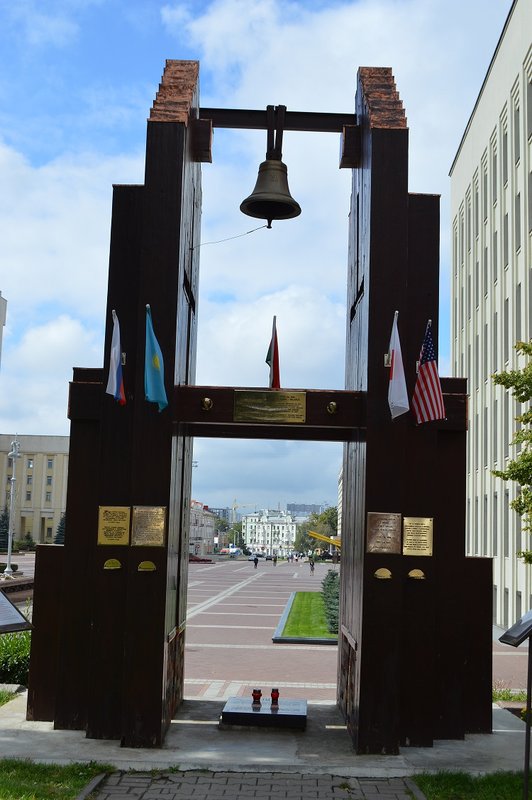 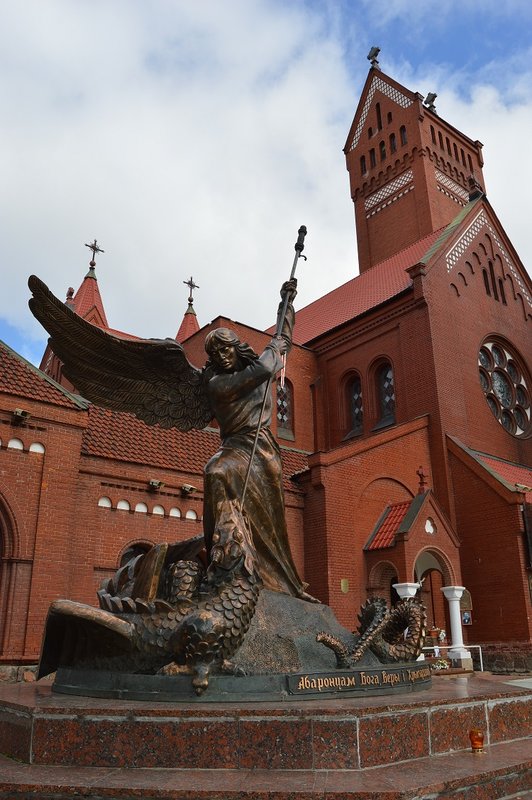 I headed into the city center and walked along the river for about an hour to reach the Palace of Independence. The walk took me along a beautiful park and, on the other side of the road, I saw a very interesting sculpted mural that was Soviet-esque - right above a Kentucky Fried Chicken! 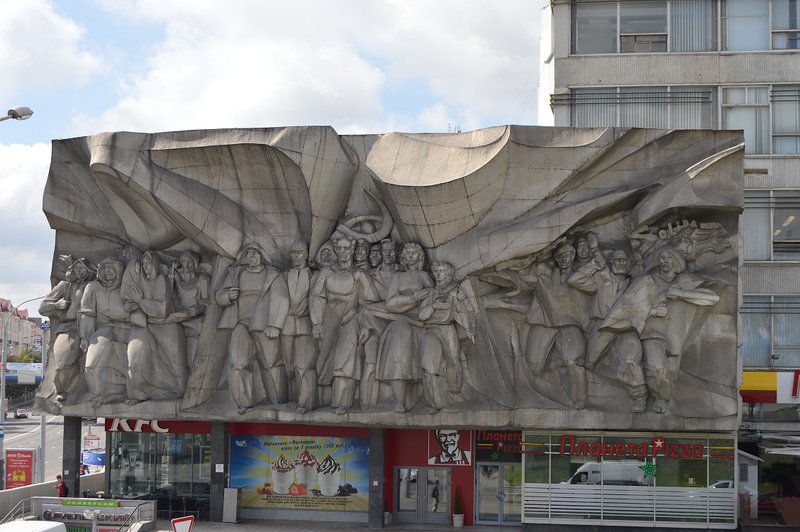 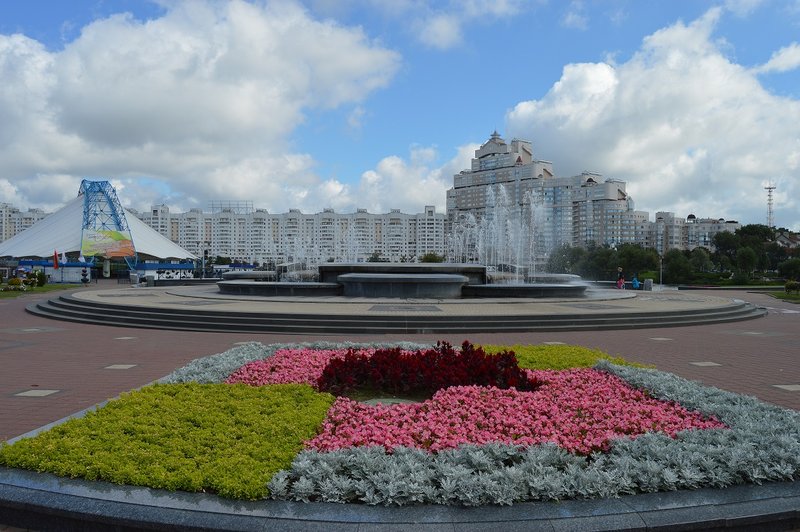 The walk was very peaceful and relaxing; the weather was warm, but not nearly as hot as it was in Moscow (thankfully!). I came across the museum for the Great Patriotic War (World War II), which had some really cool statues and monuments around it. Flying above the museum was the flag of the USSR (I managed to catch the flag in some of the photos below). The museum was inside the park that ran along the river. Behind the museum was an old bomber airplane on display as well. 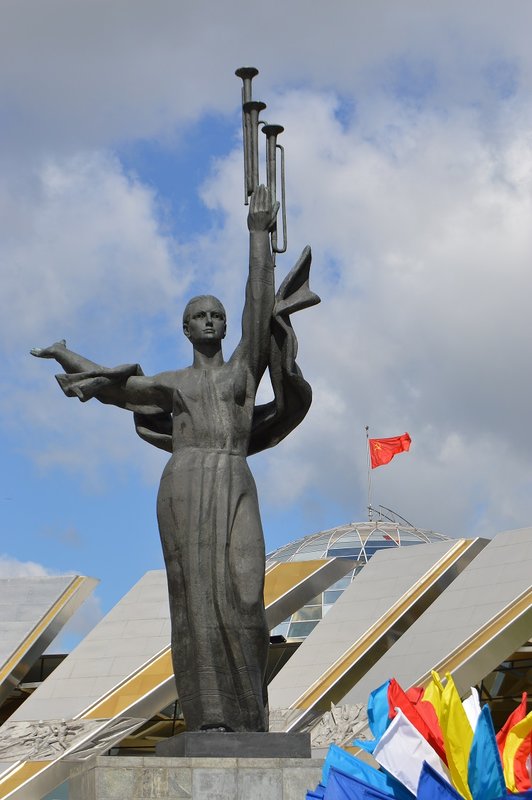 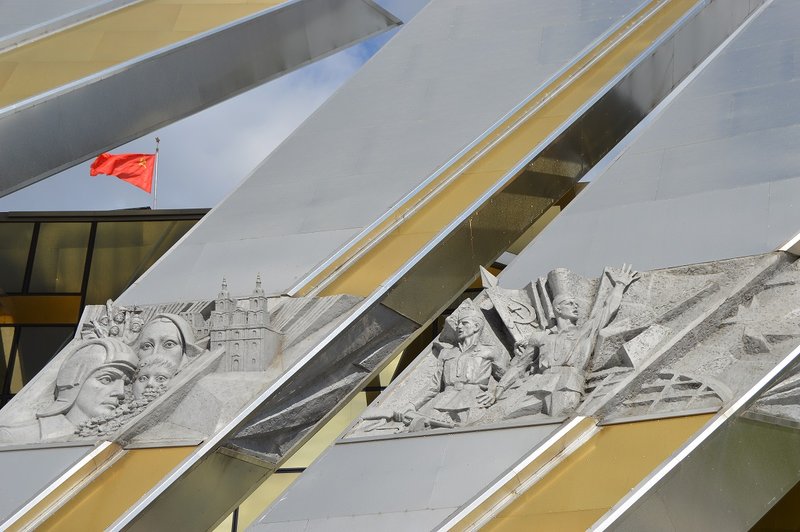 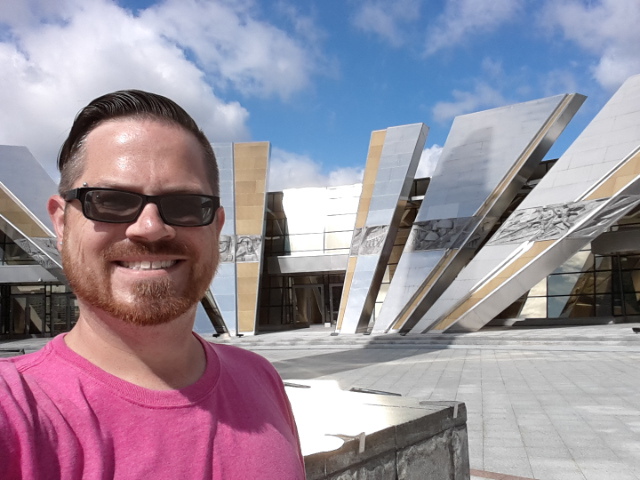 When I reached the Palace of Independence I was somewhat disappointed because it was not terribly impressive. The square in front had a gigantic Belorussian flag on display; next to the palace was a more interesting building, though I'm not sure what the building was. I spent a few minutes there before retracting my steps back into the city center. 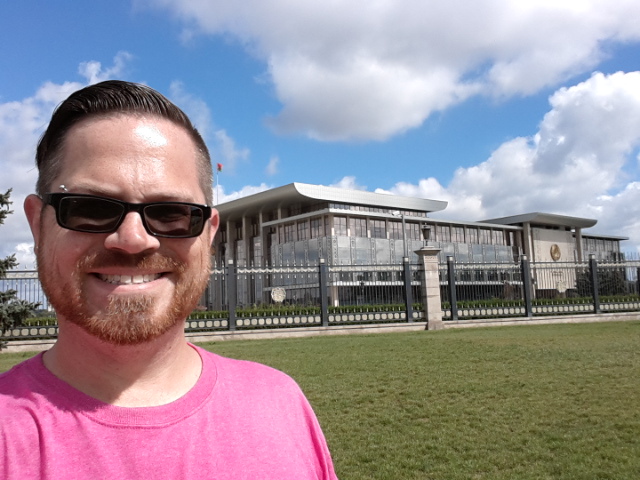 This time I walked through the park to enjoy the serenity of the area. There were several small food vendors setup around the park, all selling corn on the cob! One area of the park had a large lake and a giant fountain on it. People were out kayaking on the lake as well. 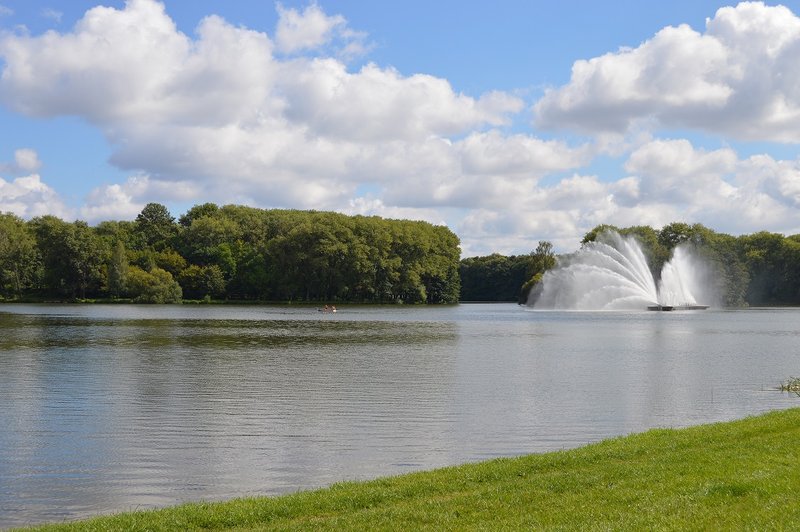 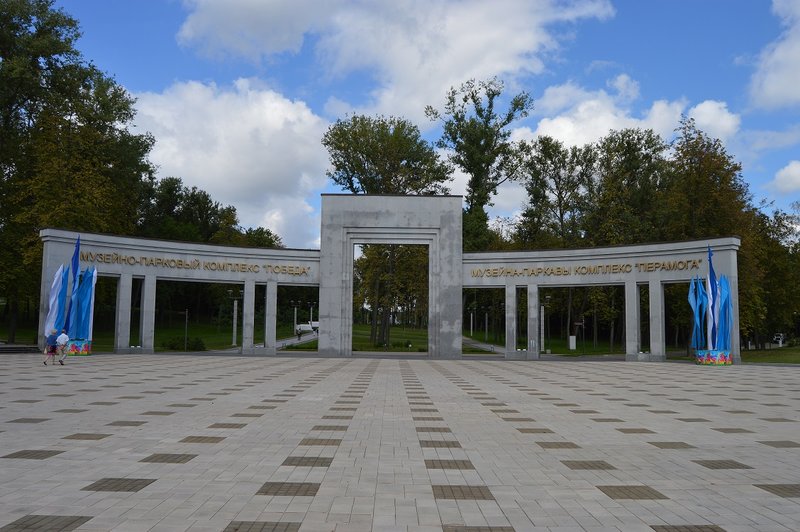 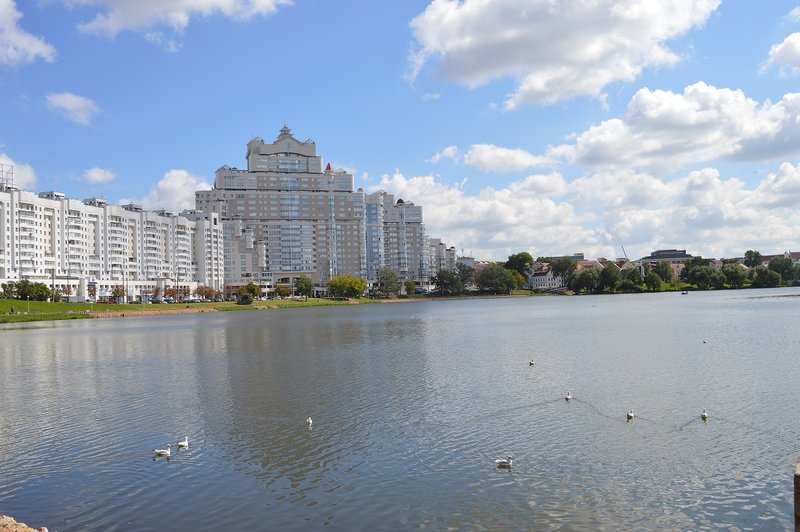 I wandered through the park for a considerable amount of time before making my way to the opera house. This was a large and ornately decorated building with several statues adoring it. In the front square was a fountain (Minsk has fountains all over the city!). I found myself wishing that I was able to go and see an opera there. 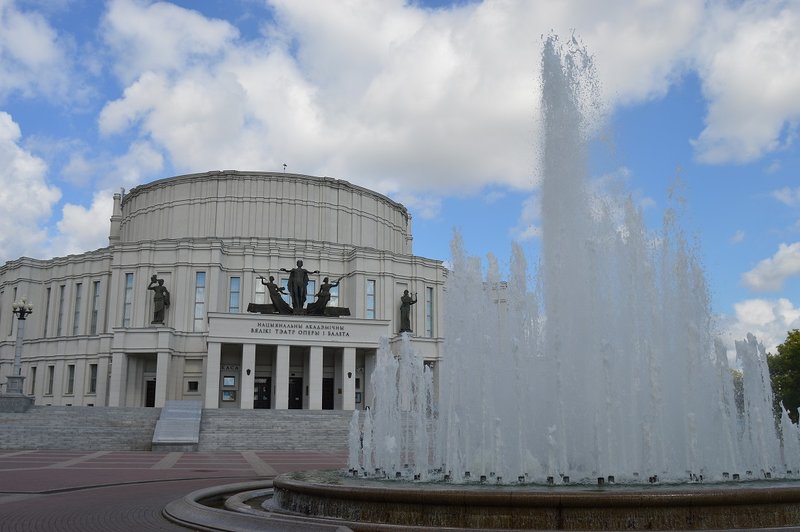 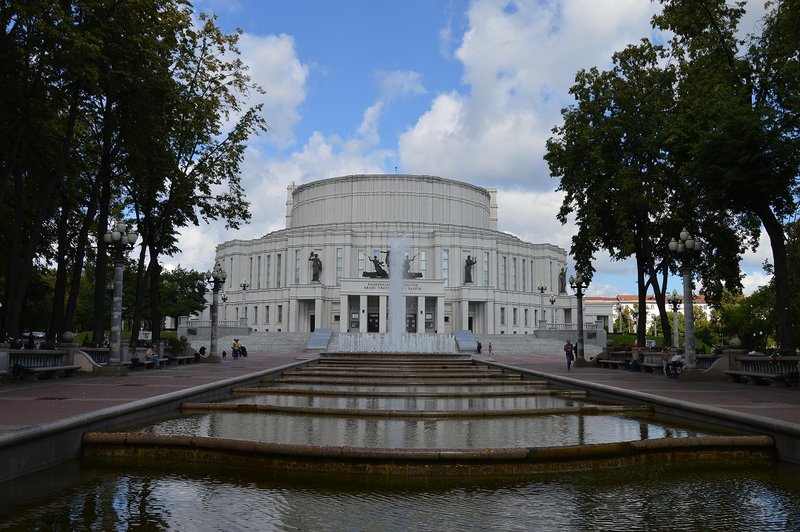 As I was walking through the city I discovered yet another park with yet another fountain. This fountain had a sculpture on one side of it, which I found odd since most fountains place the sculpture. However, the jets on the fountain had been positioned in such a way as to shoot through a wreath that one of the female figures in the sculpture was holding. 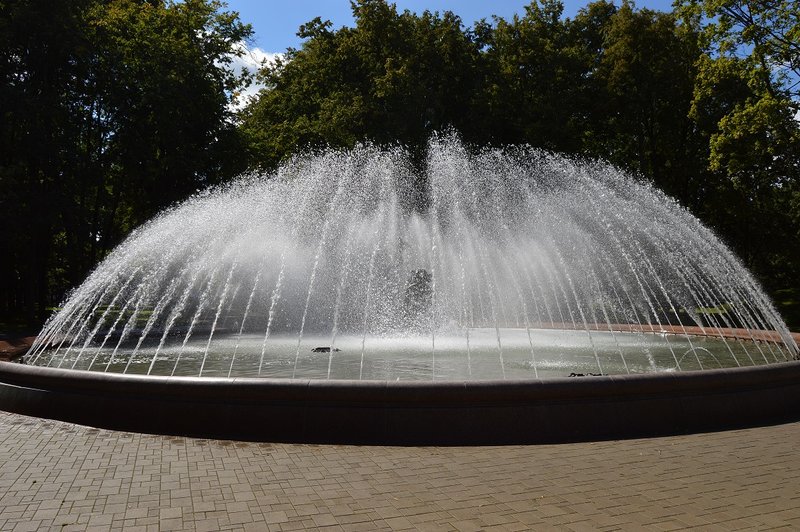 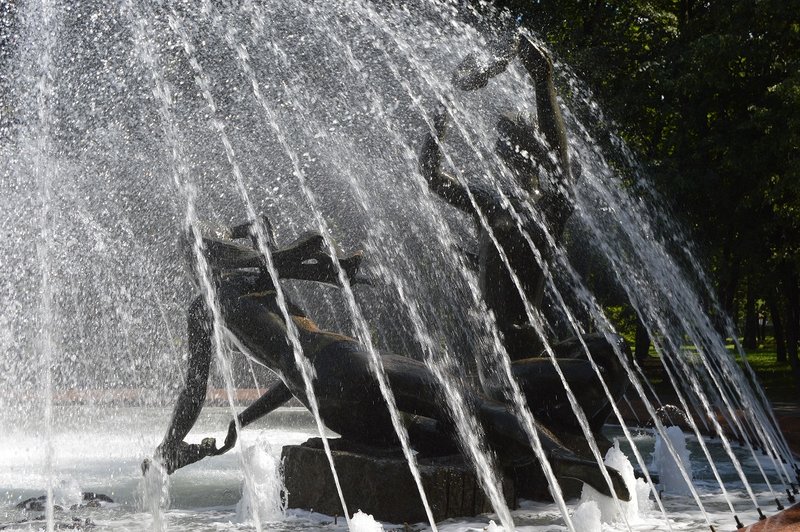 Up next was the Palace of the Republic and another large square. The building was rather beautiful, with columns and statues around the top. En route to the building I passed by the Circus of Belarus, which had one of the strangest statues that I've ever seen: clowns playing around with instruments. 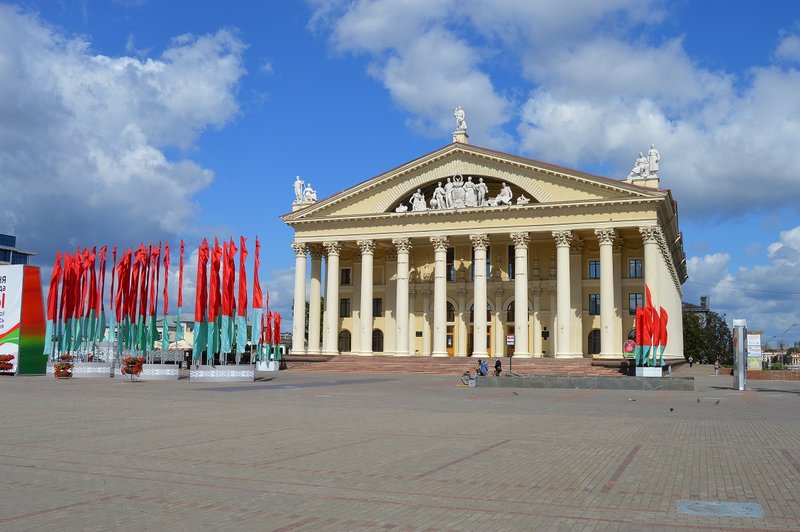 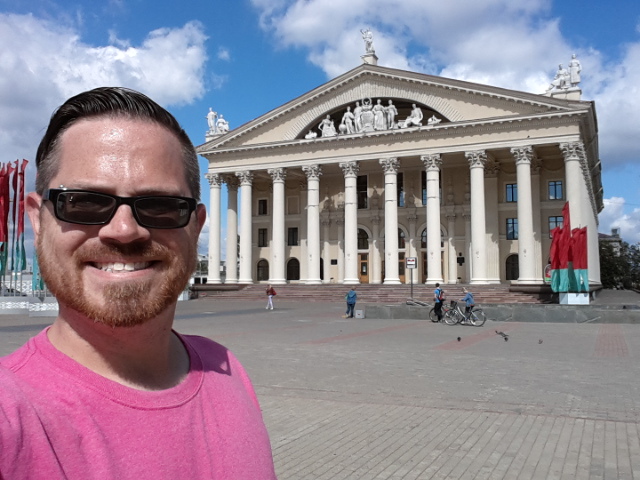 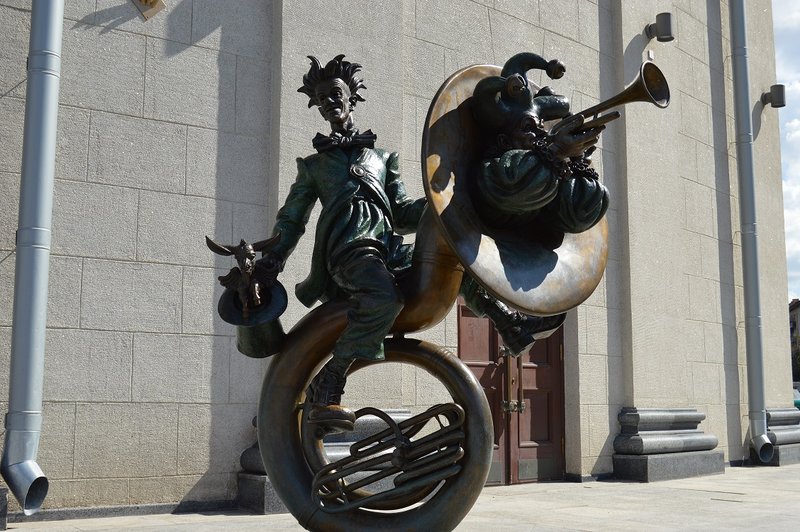 My final stop was the town hall, which had some very colorful coverings over the pillars in front of it. After walking around the small square near the town hall I stopped to grab a quick bite to eat for a very late lunch (by this time is was 15:00). 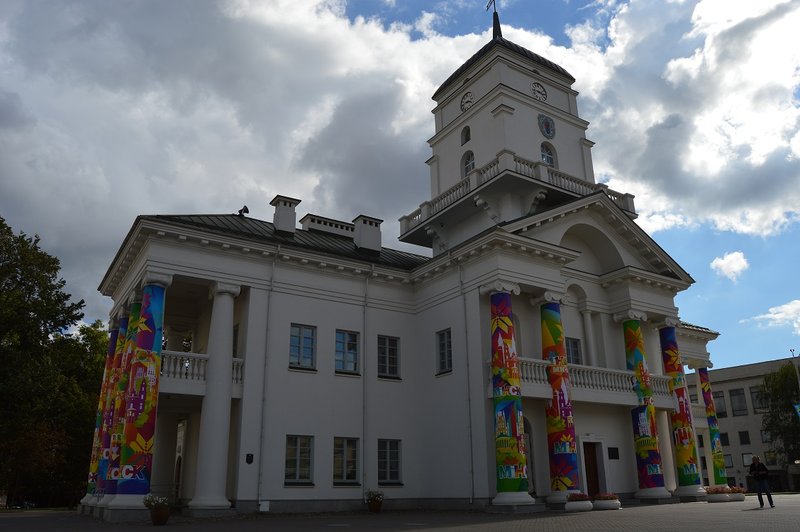 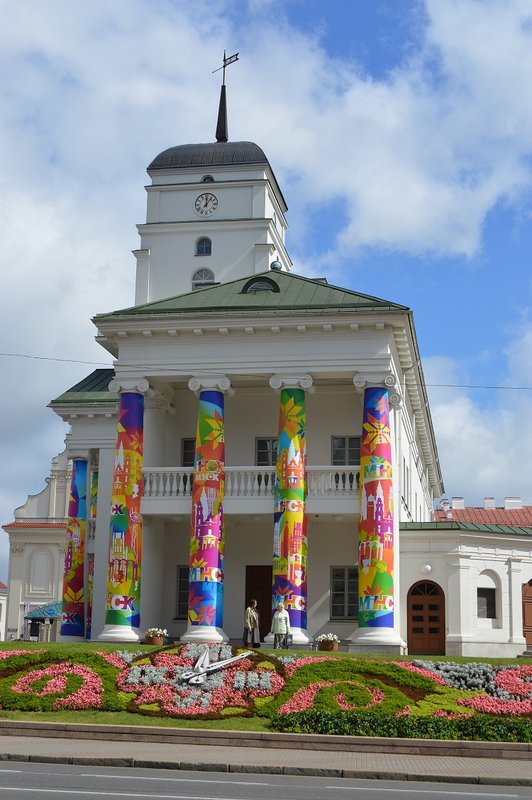 I headed back to the hotel to relax for a little bit and then decided to go out for a coffee. There was a small coffee shop a block away from my hotel that I decided to try. I ordered a mocha and settled in to read for a little while. The place was very nice, with comfortable seating inside several window niches, along with a large outdoor seating area. I spent several hours there before finally coming back to the hotel for the night.

Posted by Glichez 11:36 Archived in Belarus