My last day in Moscow allowed for a few hours more of sightseeing and I made the most of the time.

I decided to revisit Lenin's Mausoleum this morning. For some reason I found myself drawn back to see his body again. This time I came prepared to find the graves of John Reed (author of "Ten Days that Changed the World") and Yuri Gagarin (the first man in space). John Reed's marker was written in Russian, despite the fact that the other American buried at the Kremlin is in English; thankfully I had looked up where to find him and it was quite easy. Reed's name is the second one down in the middle of the marker in the photos below. Yuri Gagarin's marker was along the actual Kremlin wall and was in an area blocked off, so I was not able to visit his grave. 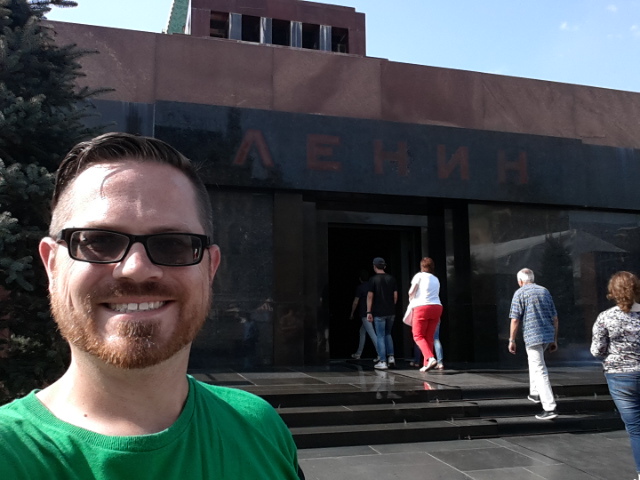 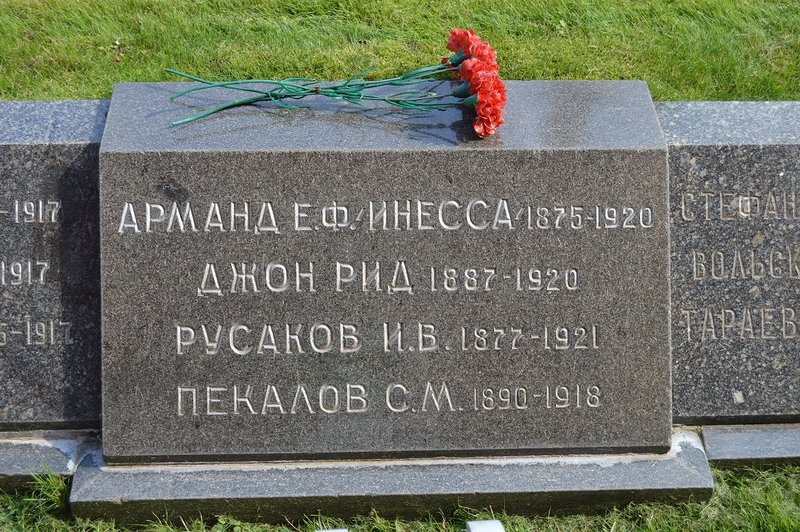 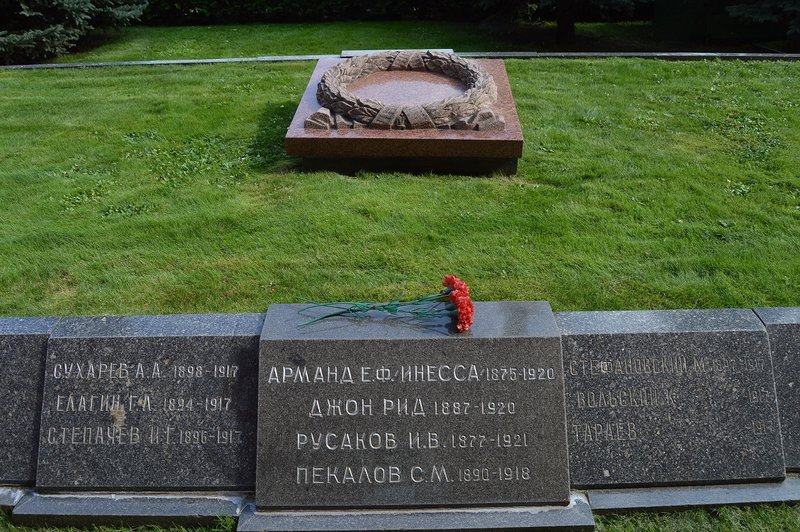 After seeing Lenin once again, I quickly wandered around Red Square and took some selfies while wearing my new Soviet military hat. Some people gave me funny looks, but I just ignored them. I look good in the hat and the pictures are amazing! 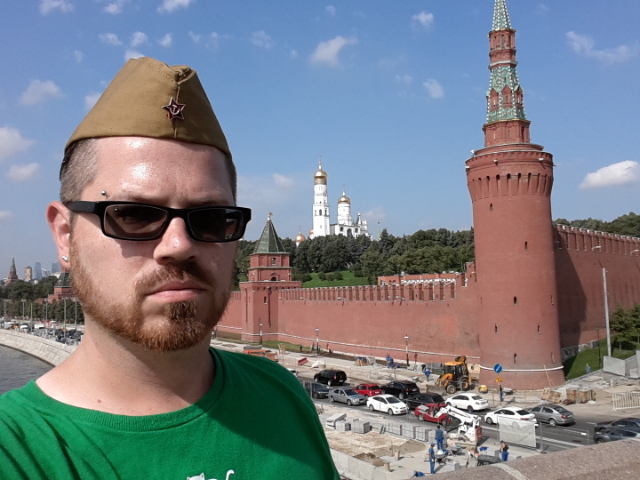 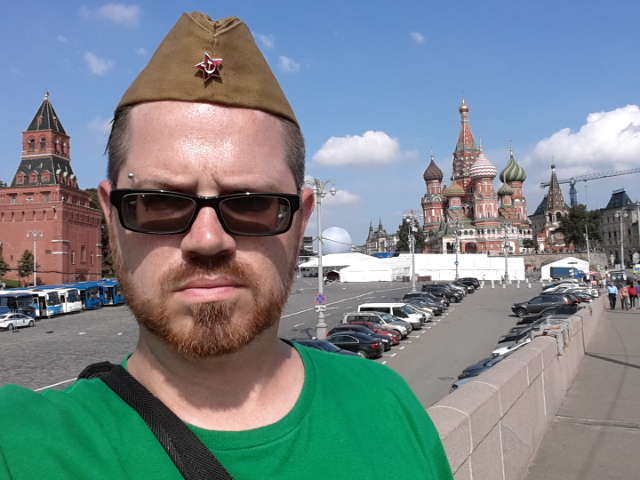 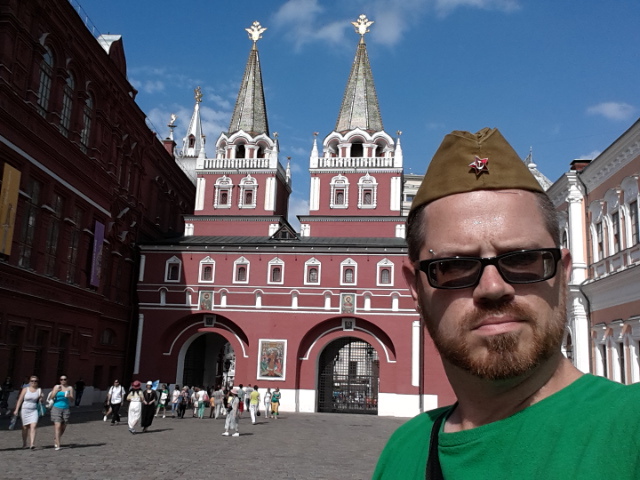 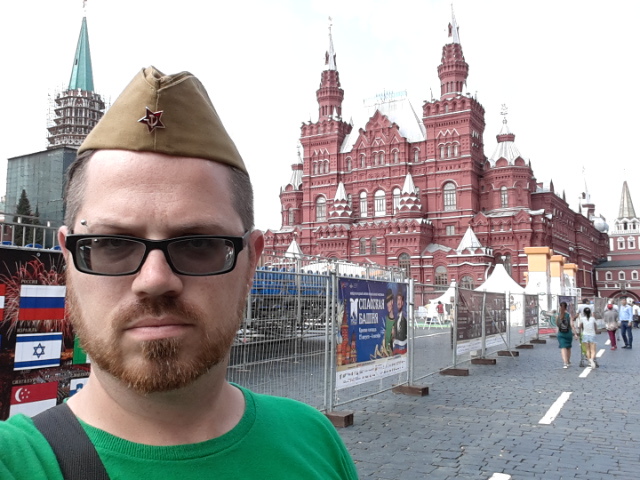 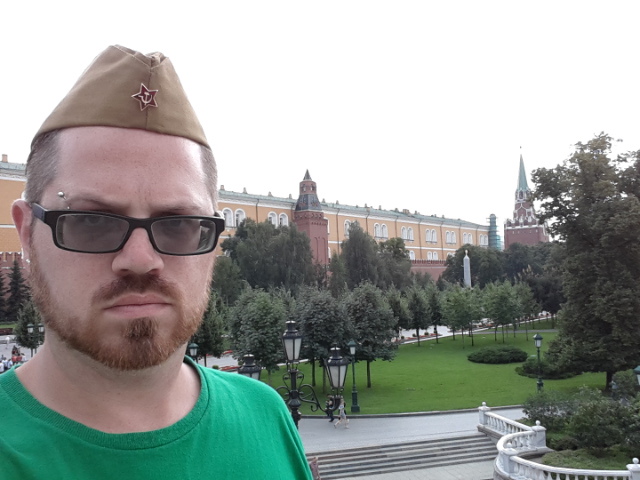 The final bit of sightseeing was a visit to the State Historical Museum, which I had heard about yesterday. This museum was located in Red Square in the large, imposing red building that I'd taken several selfies in front of. The museum was massive, with a huge collection of items (I read that they have over 4million individual items in the museum!). The museum displayed artifacts chronologically, detailing out human development. It was rather interesting seeing the development of crude tools, side by side with one another. There were some amazing mummified bodies, including just a head. 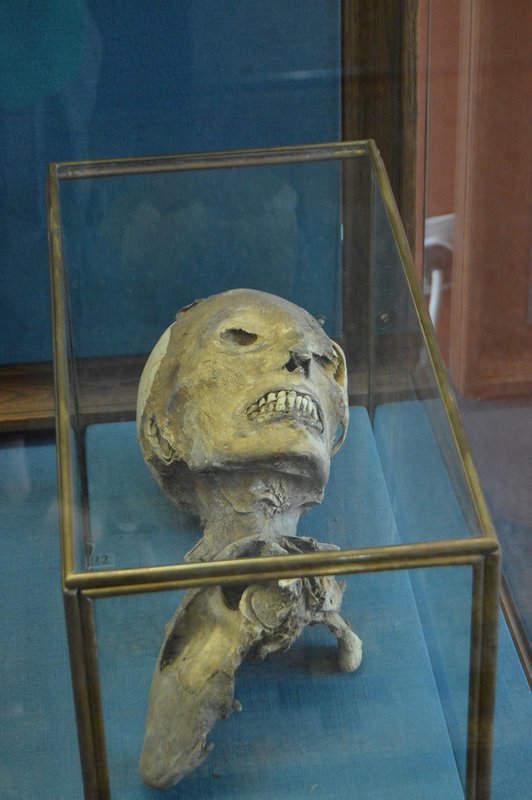 Another section had an impressive array of valuables from the Tsars. There were jewels, medal and awards, seals, trinkets, etc. They had the personal razor of Tsar Alexander I, the imperial seals of Catherine the Great, a wooden cup that Peter the Great made himself (see below), etc. There was a Chinese man walking around to each display case: he would stop, snap a photo and move on; he didn't stop to actually look at or admire any of the items on display. He went through the entire exhibit and took pictures of each and every case. 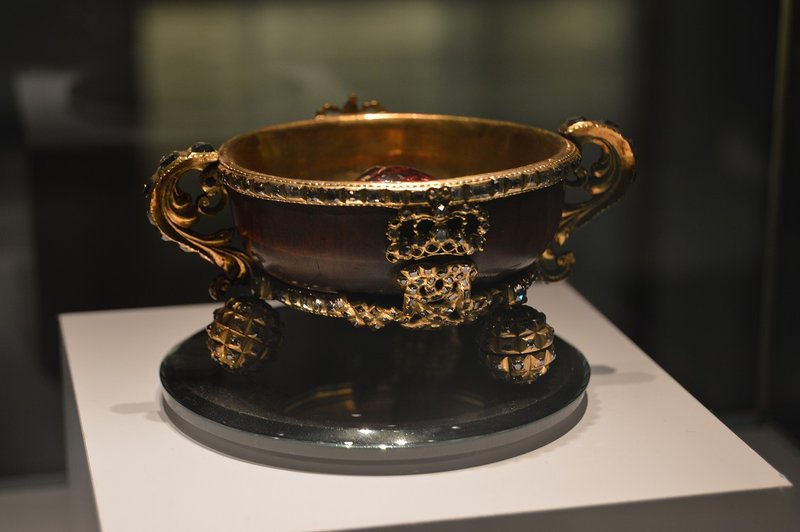 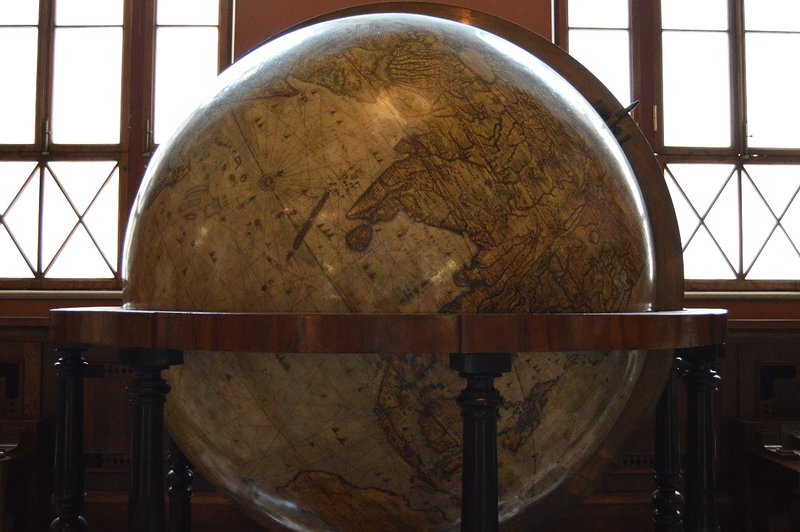 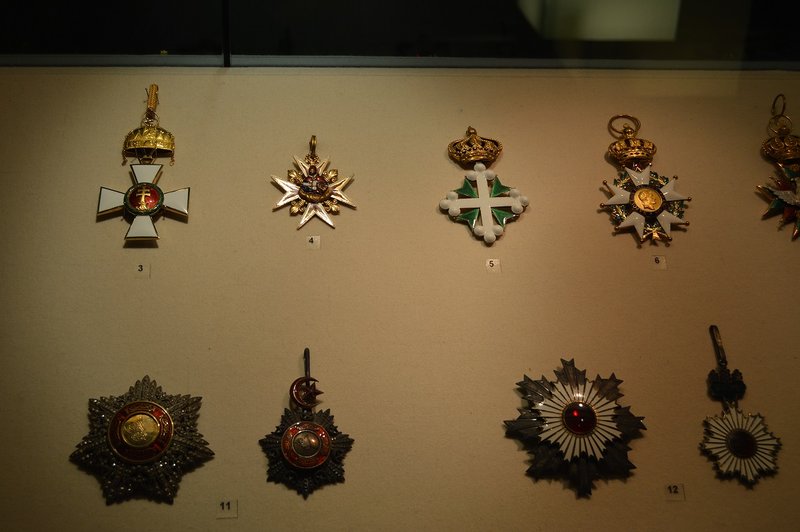 I wandered to the upper floors of the museum, but the galleries there were all closed off. I know the announcement from the day before mentioned Napoleon's sword, but I could not locate it anywhere in the museum; sadly none of the staff spoke English or could help (though one would think the world "Napoleon" might be enough to indicate what I wanted).

I next wandered around the courtyard outside the Kremlin wall. At the Tomb of the Unknown Soldier, young boys (10-12 years old) were practicing marching and guarding in the same manner as the professional guards (perhaps the Russian form of ROTC?). I also found the monument to Stalingrad among the World War II memorials. 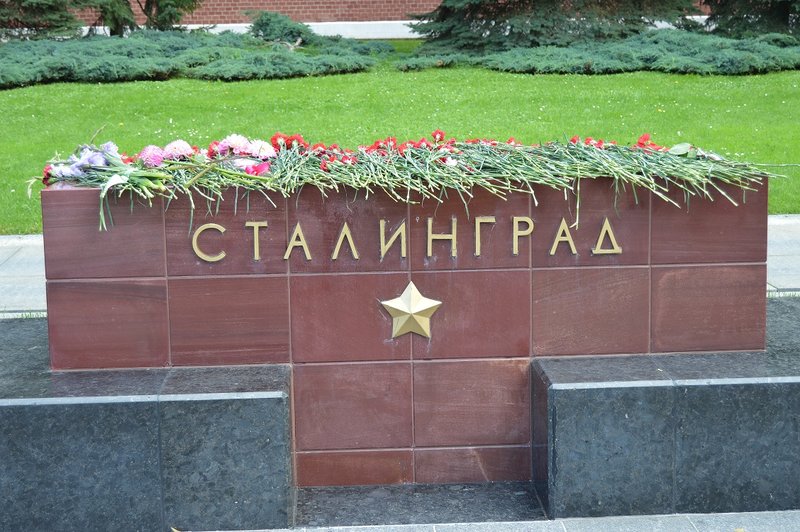 On the way back to my hotel I stumbled across a sign counting down to the World Cup being held in Russia in 2018. 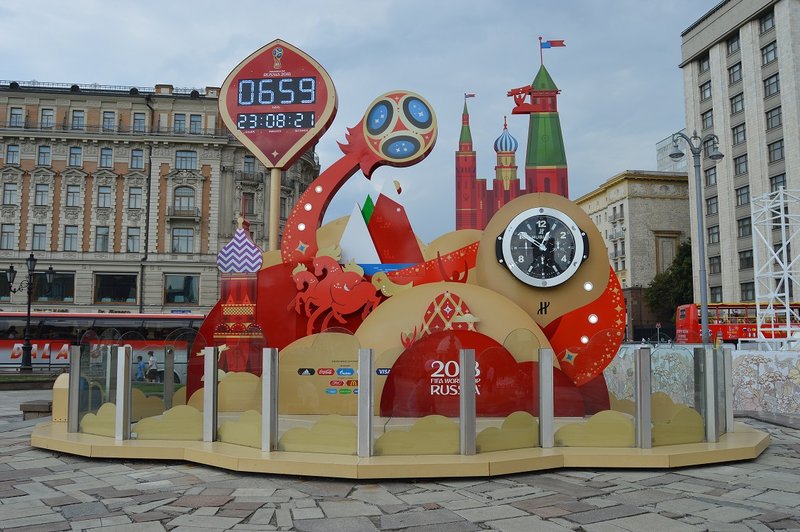 My airport transfer was leaving at 14:00 and I was really glad that I booked an early transfer as the traffic to get to the airport was quite bad. Even so, I made it to the airport with plenty of time, so I decided to grab a couple drinks and get some work done. The flight to Minsk was just over an hour long and was rather bumpy the entire way. Despite the short flight time we were still served a light meal! It was a sandwich of some sort, though I couldn't tell what meat was in it. It always amazes me that foreign airlines still provide all of the perks that American-based airlines skip.

The Minsk airport is very small and it took no time whatsoever to collect my bag and make it out to the arrival hall. Since I was flying from Moscow, I did not have to go through customs (apparently Russia and Belarus have a similar border like the EU member states). I met with my driver and we drove for about an hour into the city. I'd arrived right after a rain storm and the sunset was stunning. The clouds behind us were dark and hazy, with several very low-hanging clouds filling the sky.

My hotel is in the city center of Minsk and is one of the nicest hotels that I've ever stayed in! The room is a mini-suite, with high-end furnishings. Apparently my money can go quite a long way here in Belarus - and this isn't an expensive hotel!

Posted by Glichez 12:24 Archived in Belarus