Today was my full day to see what Buenos Aires has to offer, and it was amazing! I was already impressed with city and the overall atmosphere – it felt like any other large city (ie. NYC), which I love. I planned to take the two free walking tours of the city today. 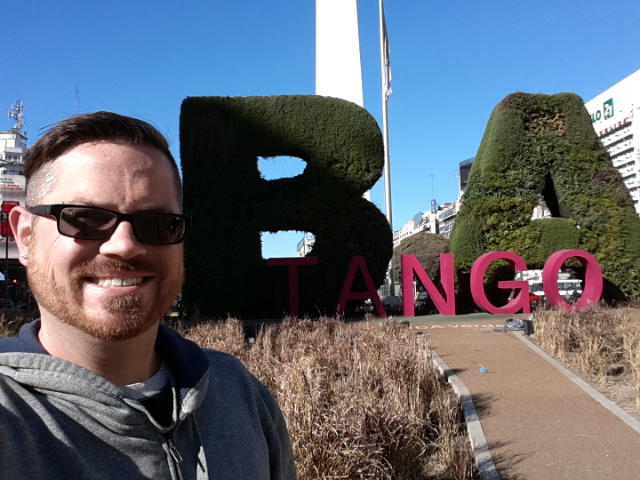 The first walking tour began at 10:30 and focused on the Recoleta area of the city, which is the posher neighborhood. The guide we had was very friendly and explained everything in great detail. We started out near the opera house and the state supreme court, which was a massive and ornate building. 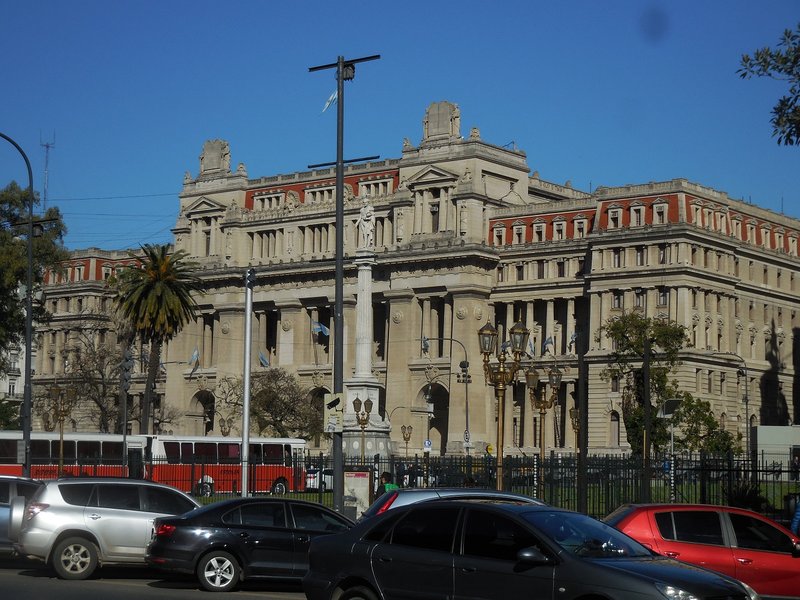 We worked our way through the city, visiting several squares and seeing many old mansions that used to belong to the aristocracy (they are not either state-owned, used as embassies or hotels, etc). We even stopped by the memorial for the Falklands War! 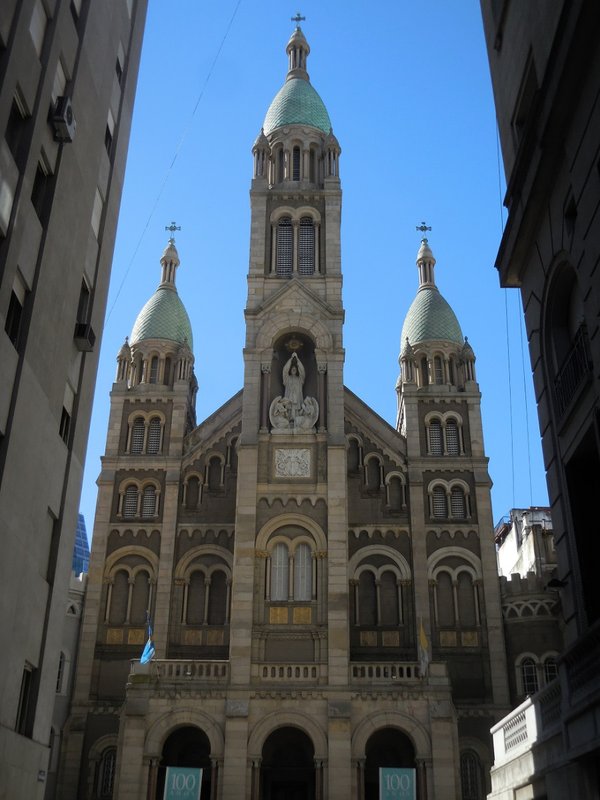 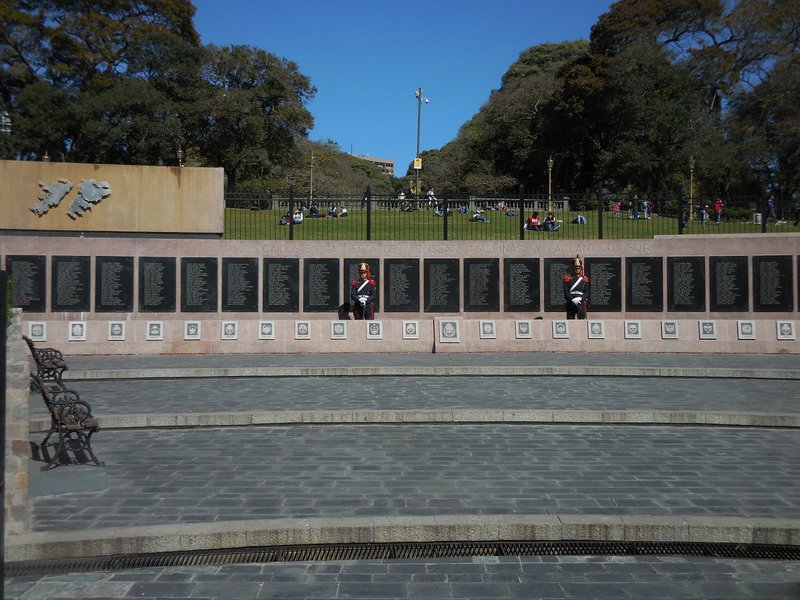 The Plaza San Martin, which is next to the Foreign Ministry, the Danish flag was on display everywhere with the Argentinian flag. 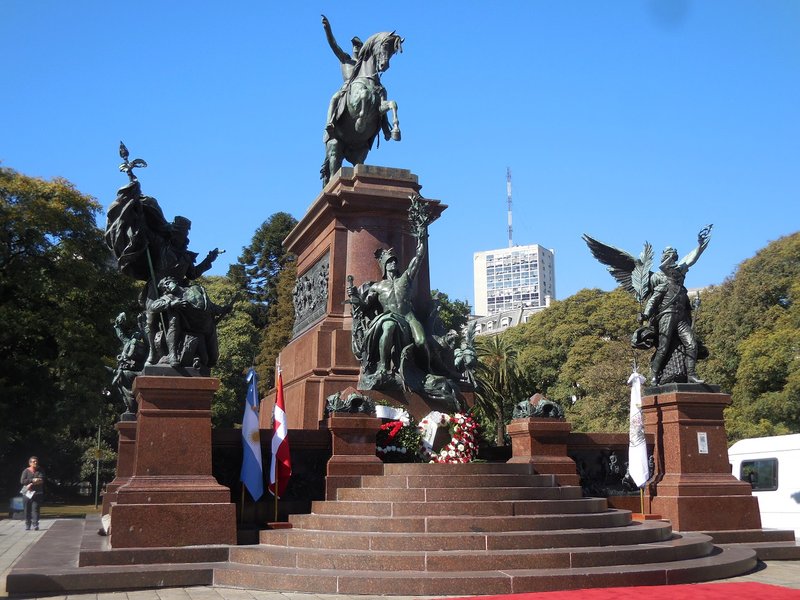 We stopped for a quick coffee break before continuing further north into the city. The tour ended outside of the Recoleta Cemetery, but did not go inside. After the tour ended, I ventured into the Cemetery to find Evita Peron’s grave. She was buried in her family crypt (under her maiden name). There was a map at the entrance and it was very helpful in finding her grave. It was very simple: plaques on the sides of the crypt and flowers adoring the doors. 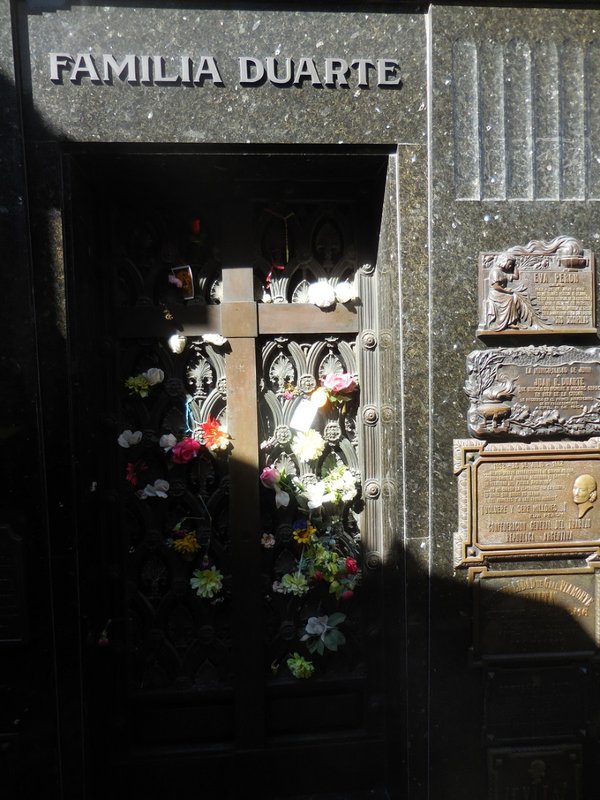 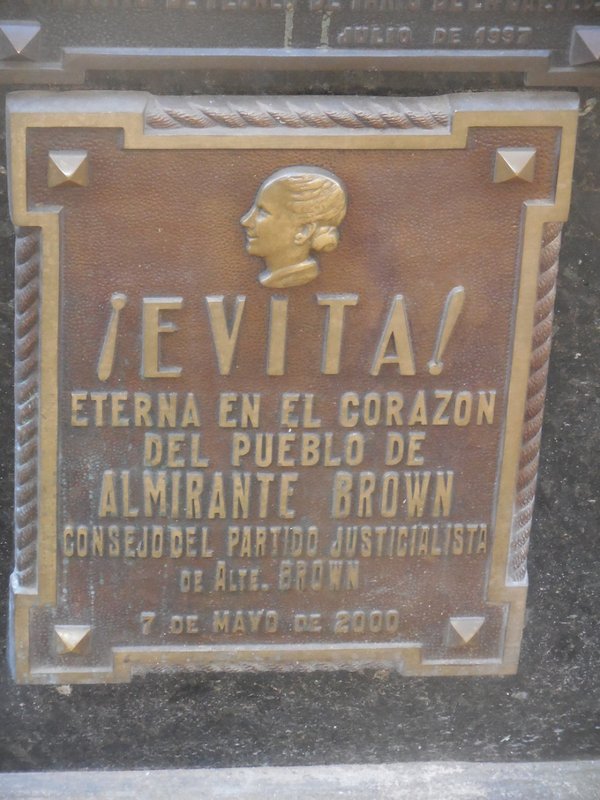 I walked around the cemetery for a few minutes, admiring all of the amazing crypts and graves. One of the strange things that I noticed was that many of them had the coffins exposed inside the crypt/mausoleum! It was rather strange to see the coffin just sitting there. 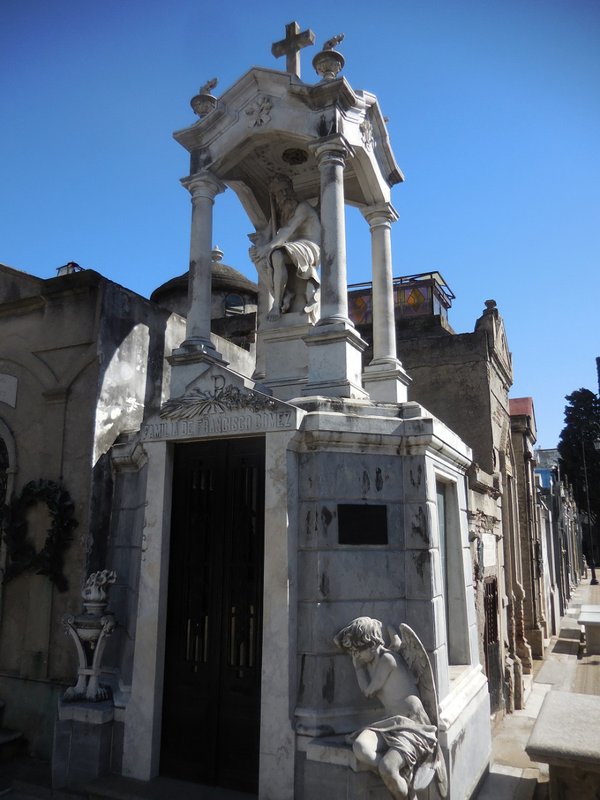 I next had to make my way south to the National Congress for the afternoon walking tour. I originally planned to take the subway there, but decided to walk and see more of the city. It was about a 30-minute walk and it was fun getting to see so much more of the city. This area wasn’t touristy whatsoever either. At one point I was waiting to cross the street and an elderly lady came up and ask for assistance crossing the street (well, she indicated that since she spoke no English and my Spanish is crap).

The afternoon tour was far more political than the morning tour and I learned quite a bit about the history of Argentina. Before we got started a protest made its way towards the National Congress, banging drums and setting off a lot of fireworks. The National Congress is another massive and ornate building, which was just amazing. 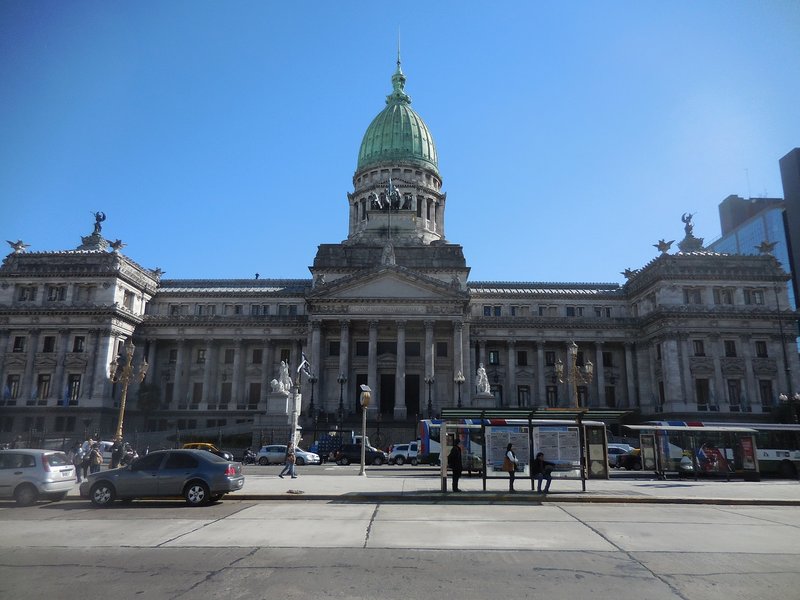 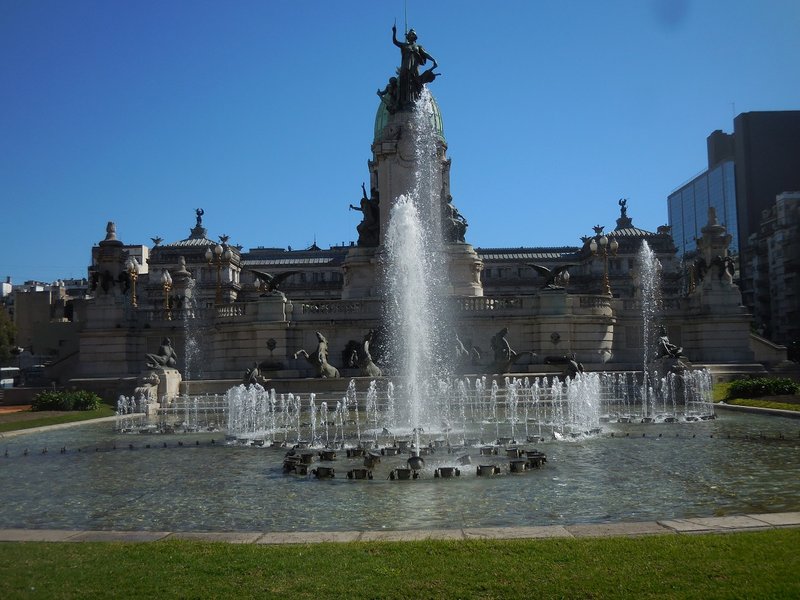 We walked along the streets, learning about the country and what all of the various monuments meant. One stop along the 9 of July Avenue introduced us to Evita and Juan Peron. On the side of a building was a massive sign of Evita speaking into a microphone (there was a second one on the other side of the building). 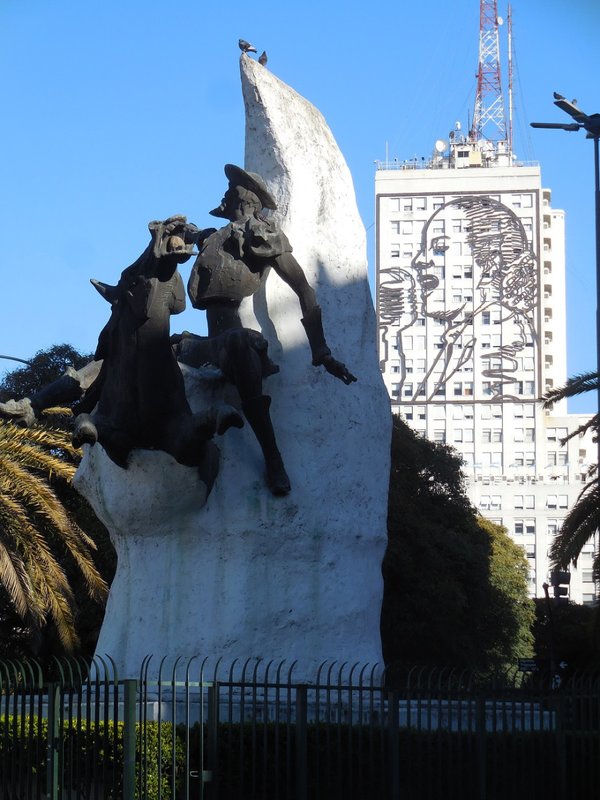 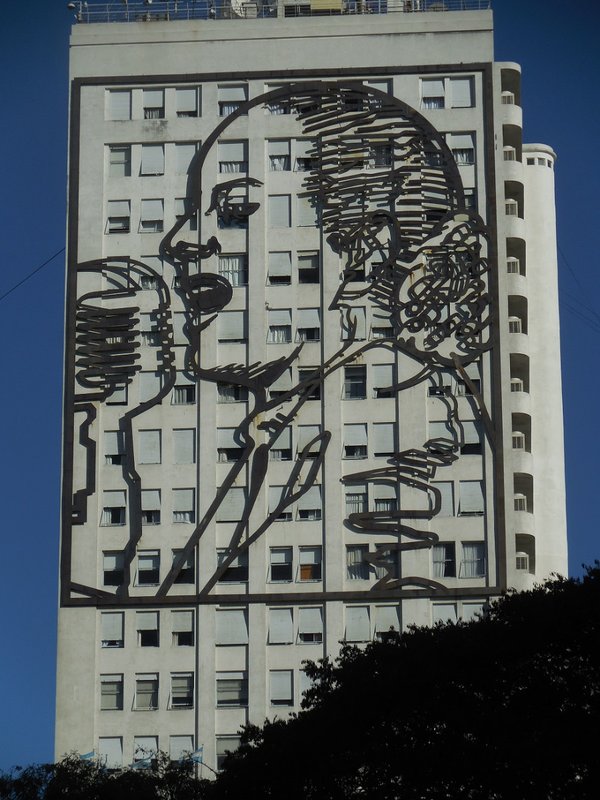 The tour ended in the Plaza de Mayo at the Casa Rosada (the Argentine equivalent of the White House). The square was packed with tourists. While we were finishing the tour, the guards came out to lower the gigantic flag for the night. 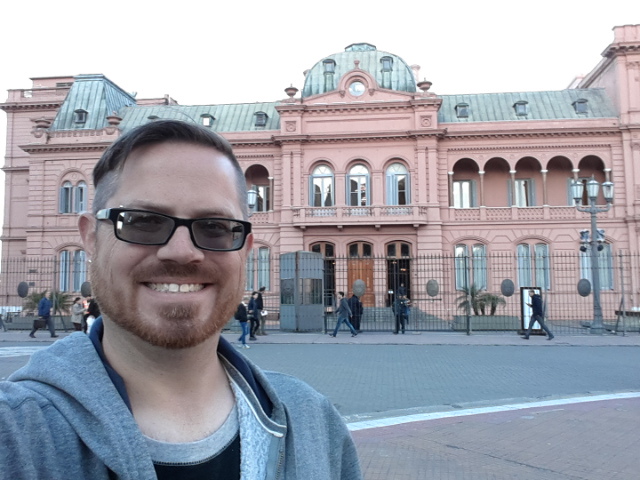 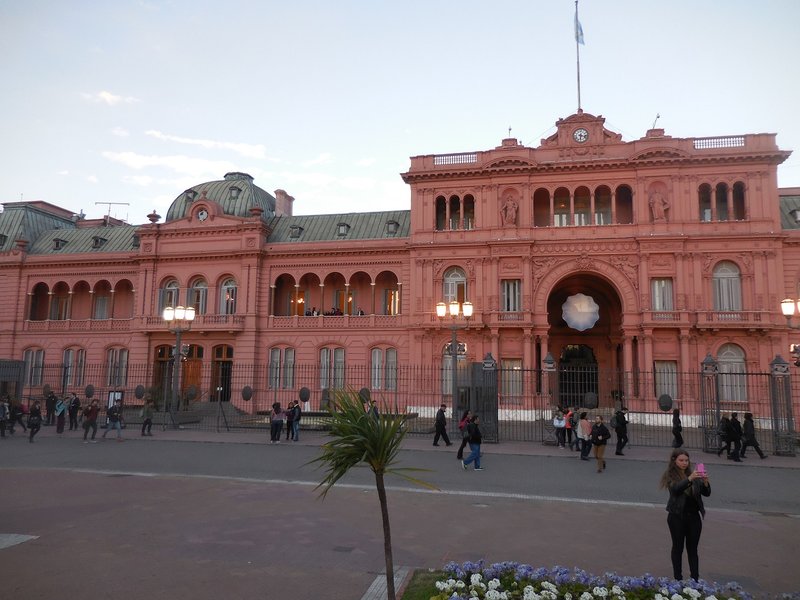 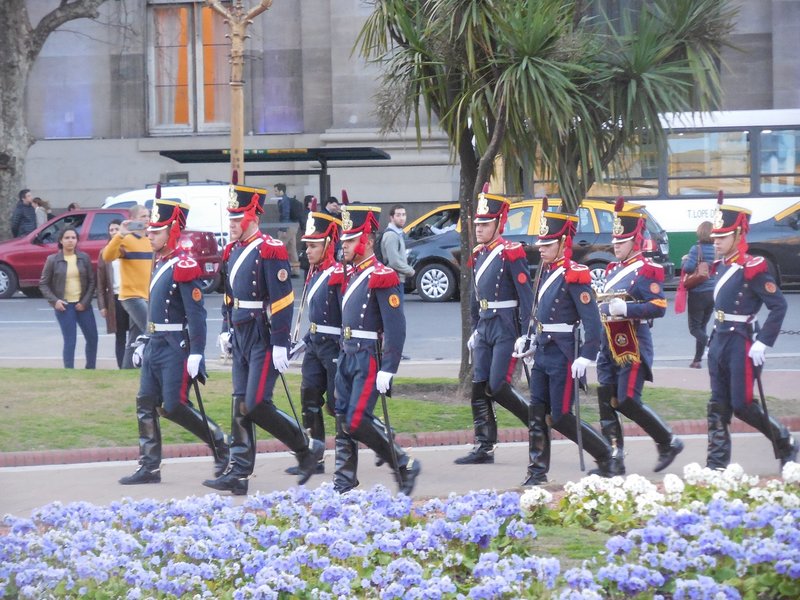 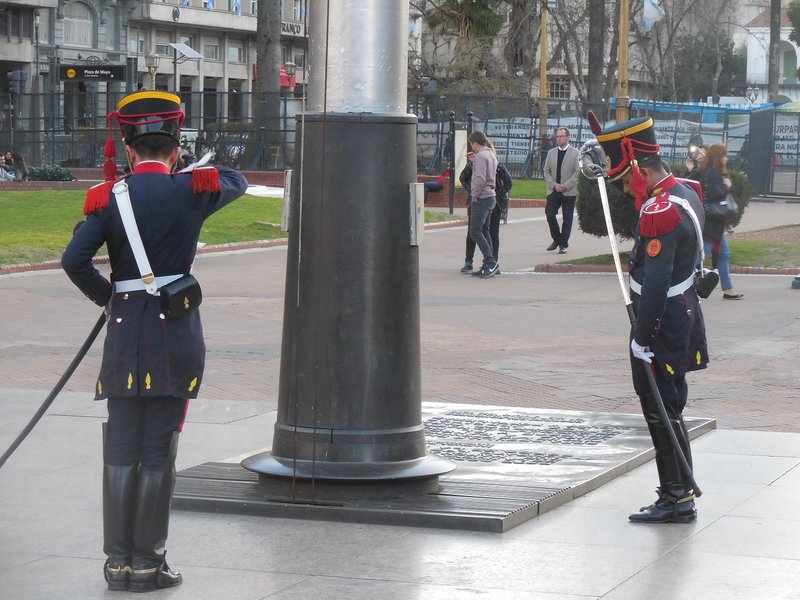 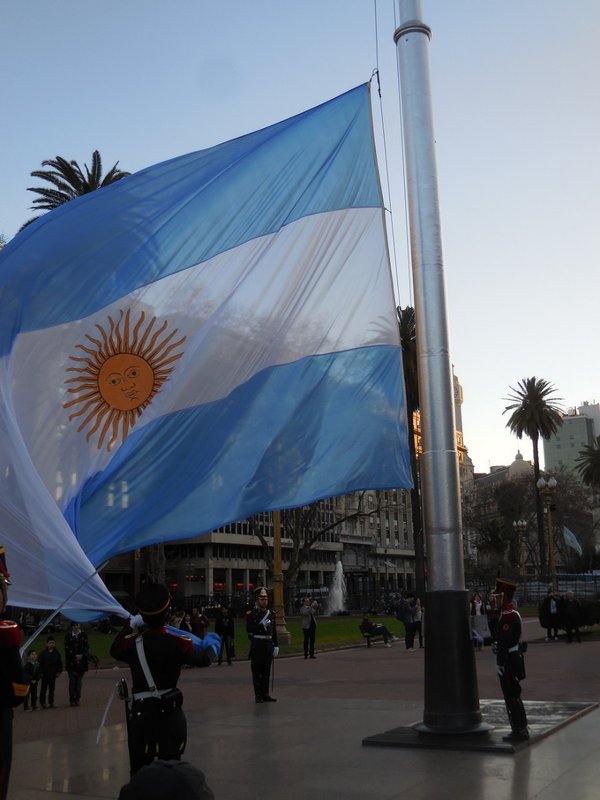 Once the tour was over, I went back to my hotel. On the way I snapped a few pictures of the main Catholic Church in Buenos Aires (and the one that Pope Francis worked at prior to becoming Pope). 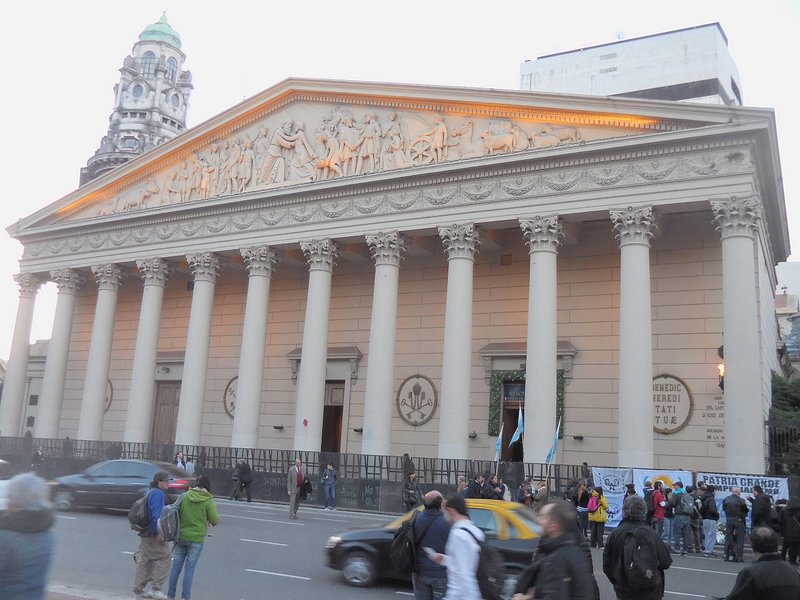 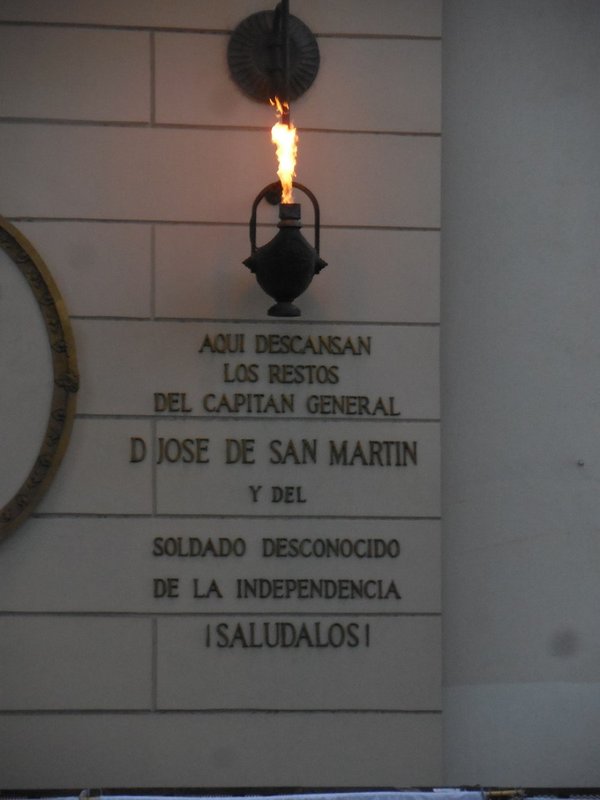 After resting for a few minutes it was time for the final event for the day: dinner and a tango show! The shuttle picked me up around 20:00 and we drove less than 5 minutes to the restaurant – it was so close to my hotel that I could have walked there! Dinner was not quite ready as they were still doing a tango lesson for those who signed up for it.

We finally got to sit down in the dining room; it was a very pretty room and had an intimate feeling to it. 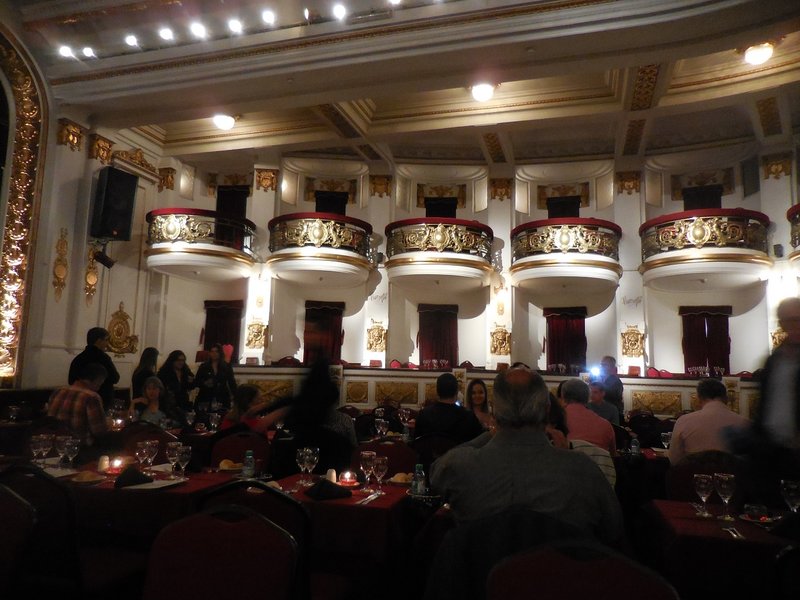 I had a table all to myself and there was another solo traveler sitting next to me. The woman sitting next to me was named Jennifer; she is from Bermuda and lives in New York; she is deaf, but was excellent at reading lips (she also had a notepad for writing things down when she couldn’t read lips). It was a lot of fun getting to talk with her; she came down to Argentina to get some dental work done because it is much cheaper here than in the US.

Dinner was three courses: (1) three empanadas; (2) steak with potatoes; (3) chocolate mousse cake. Each table had its own bottle of red wine, along with water. And yes, I did drink the entire bottle… I paid for it, I was going to drink it! All of the food was quite good! 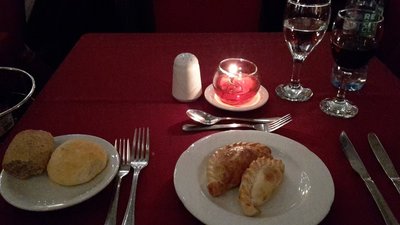 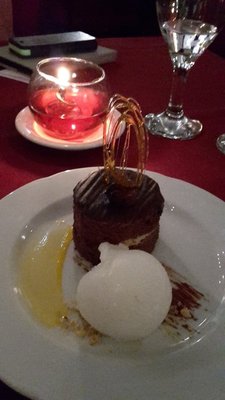 Right before the show started another solo traveler asked if she could join us and I invitied her to sit at my table. Her name was Nienke and she was here from the Netherlands. She’s traveled the past several weeks with her boyfriend, but he went off to Rio for the Olympics and she decided to come to Buenos Aires.

The tango show was outstanding! There were three pairs of dancers, along with two signers. Even the live band was amazing. Each time the performers would dance I was in awe of their talent: they moved with such grace and fluidity – and quickness! They even played the tango that was used in the movie “True Lies” – though the tango they did last night was far better!

The show ended around midnight; Nienke and I decided to grab a drink before heading back to our respective hotels (luckily she was staying nearby as well). We walked up Florida Avenue (the shopping center) and found a nice little place. I ordered a local beer and she had a cocktail. We stayed there, drinking and chatting until the place closed around 1:30. After that I walked her back to her hotel and then, somehow, stumbled back to mine. Needless to say, I was quite drunk…

Despite going to bed so late last night, I was up around 6:30 this morning so I could catch the ferry over to Colonia in Uruguay (the 5th and final country in South America that I’m visiting on this trip!). It was a rough morning, but I made it to the ferry on time and managed to sleep during the hour-long ride.

Colonia is a small, quaint town and the first thing I noticed was how quiet it was in comparison to Buenos Aires! No traffic noises, just the peaceful sound of the waterfront. Argentina and Uruguay are separate by a river, the widest river in the world: looking out across the river you can’t see the other country, it looks like an ocean! On the Uruguay side all I could see of Argentina was the massive cloud of smog and pollution that hung in the air.

I spent some time walking around Colonia, seeing the few sights that the city has and just enjoying the riverfront area. I stopped to get an ice cream at one point since I’d not had breakfast this morning. 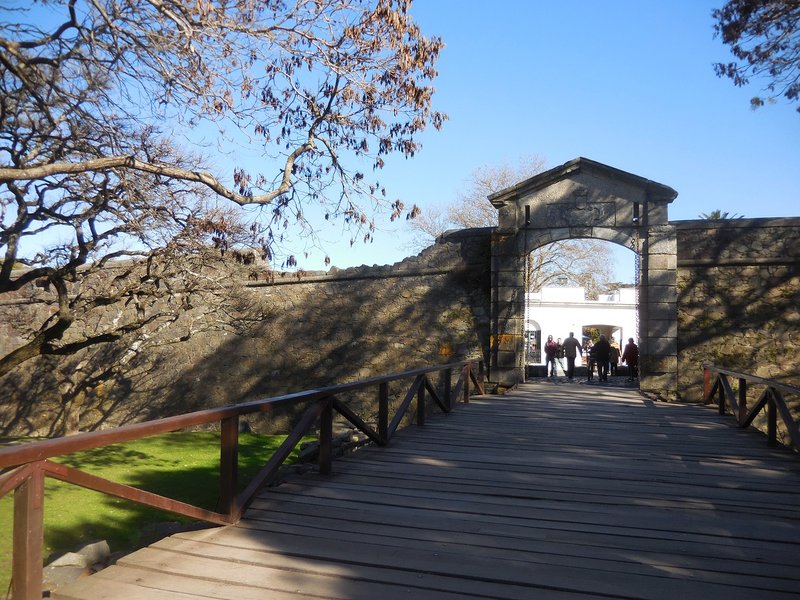 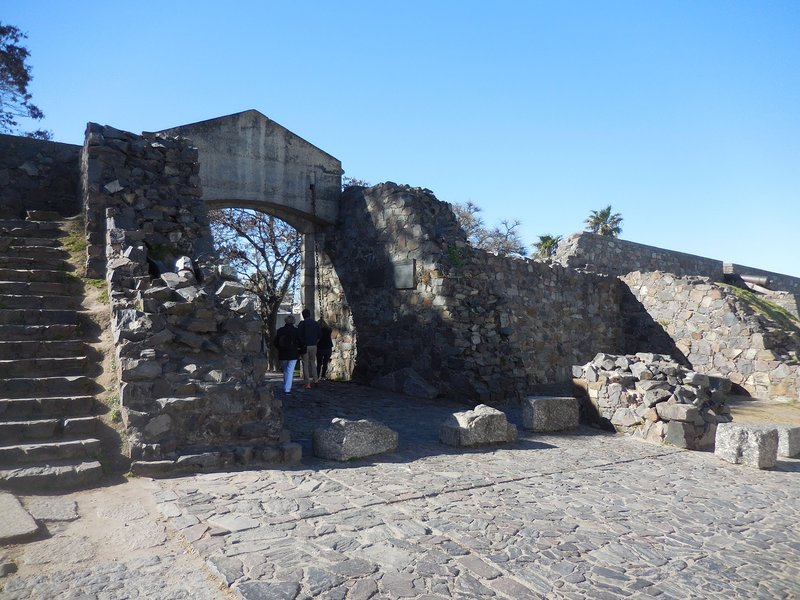 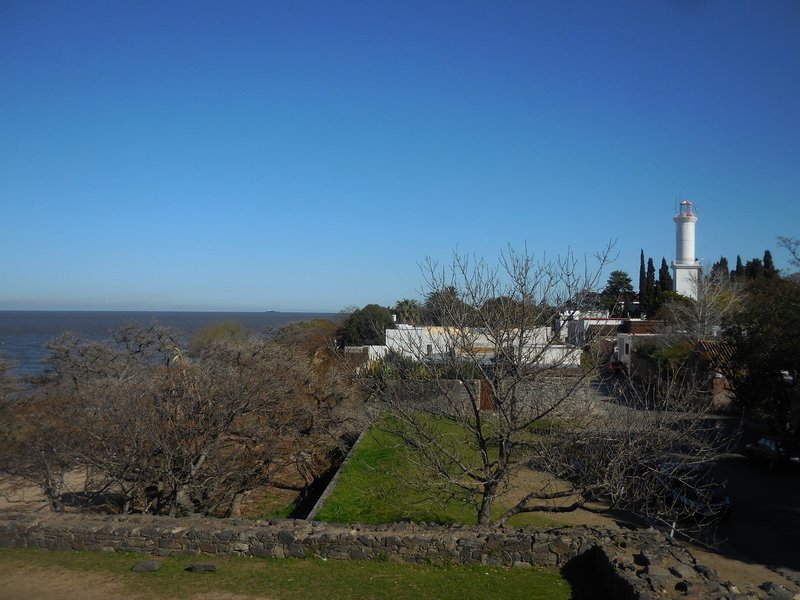 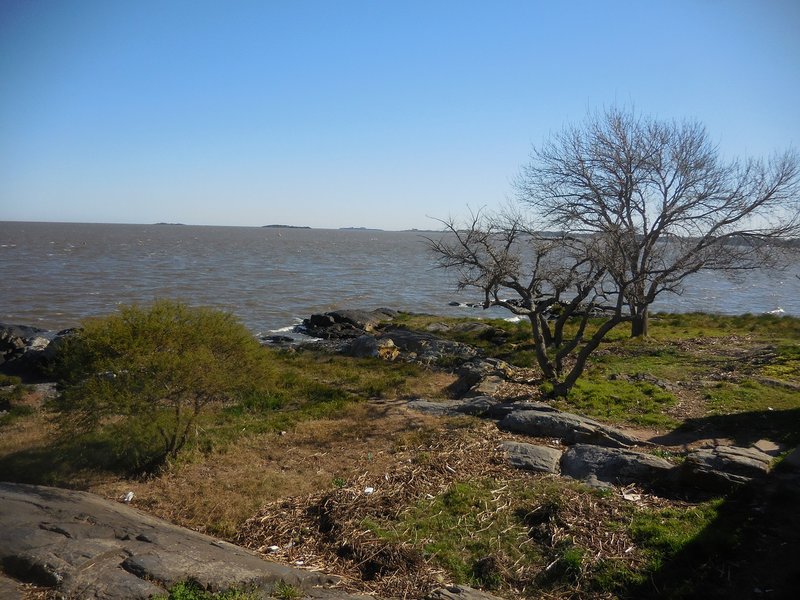 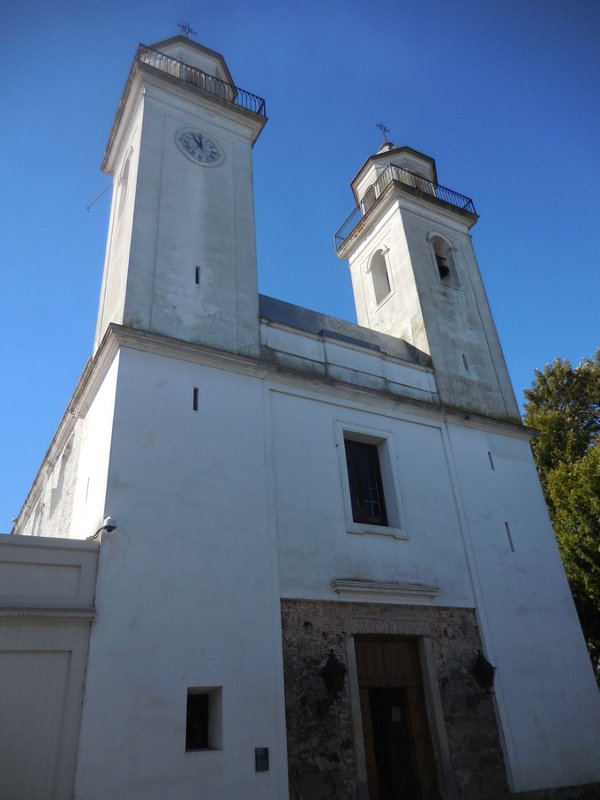 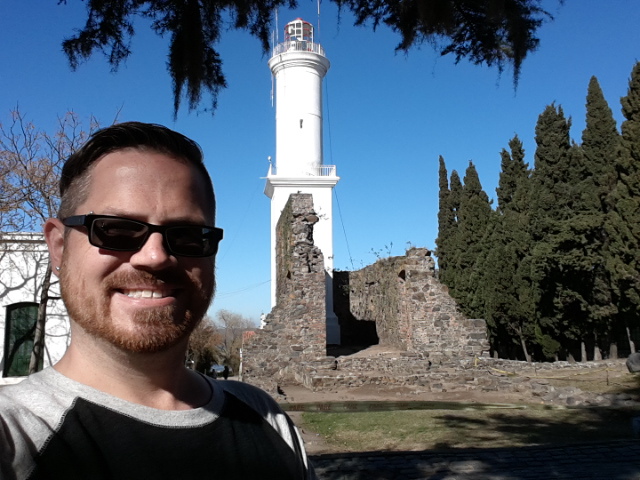 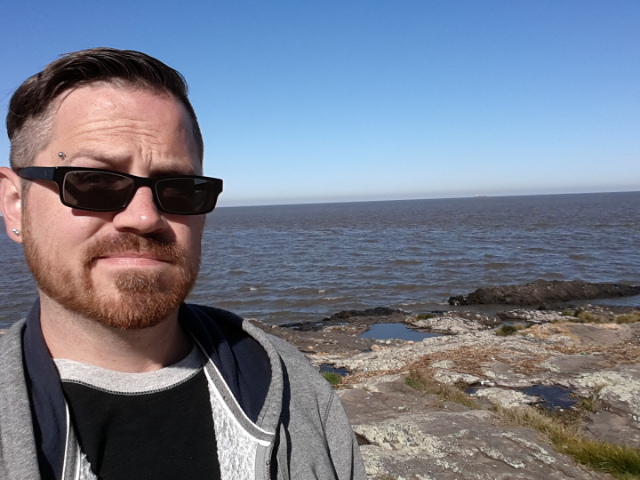 Nienke and I met up for dinner tonight; we went to a charming restaurant near our hotels. We split a small bottle of red wine; for dinner I had a local chicken dish, which was quite good. It was filled with cheese, peppers, and ham. We each had an after dinner coffee. It was a lot of fun getting to hang out and chat with Nienke again (it is always nice to make new friends!).

Now it is getting late and I need to get some sleep - I've got a long flight tomorrow... to RUSSIA!!

Posted by Glichez 14:52 Archived in Argentina