Andes Mountains... and a date!

Yesterday was another amazing day in Chile. Today’s agenda included a day trip into the Andes Mountains to Cajon del Maipo.

I was picked up from my hotel around 8:15 and found that there was a couple from Brazil and a couple from Scotland on the tour as well. We made one last pickup and two people from Colorado joined us! Their names were Sarah and Ryan; Ryan is from Parker and the three of us were able to chat a lot about Colorado, our travels, etc. My first impression was that Ryan was VERY cute! :-)

We headed out of Santiago and made our first rest stop at a small restaurant where we were served tea and coffee. Our tour guide, Josefa, also picked up a couple bottles of wine for us to enjoy later on. The main reason for the stop was to collect the food for our snack once we reach our destination.

After leaving there we made two quick stops along the way to admire the beauty of the Andes Mountains. The views were stunning as we were surrounded by the snow-capped peaks; we even got to see a glacier on the top of one of the mountains. 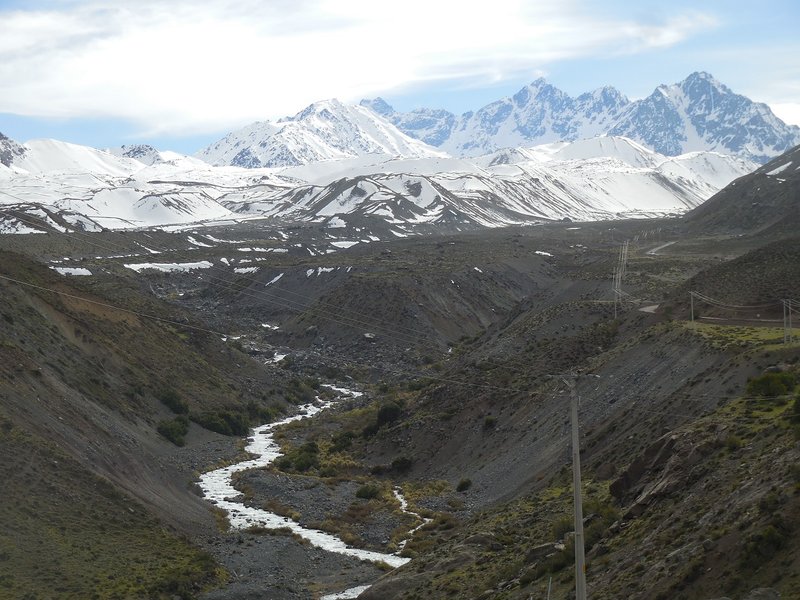 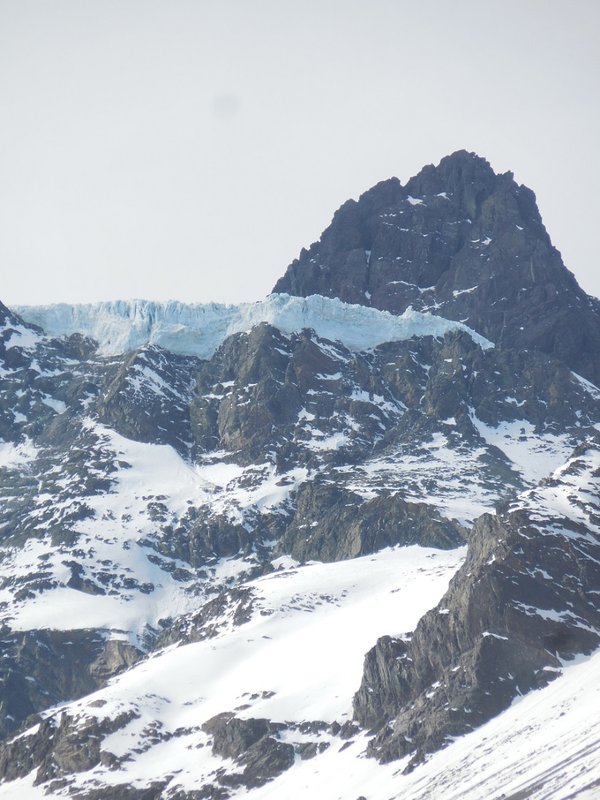 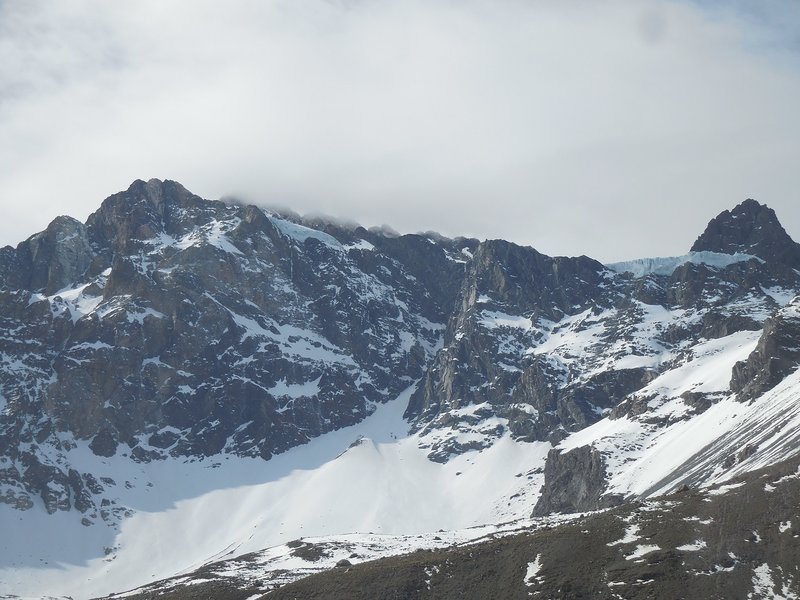 We drove on for a while more before reaching our destination: a dam and made-made lake nestled in the mountains. The area was packed with locals who had headed out of town for a short day trip and we had to walk much of the way to the best vantage point. The road was a small dirt road and all of the cars arriving created some chaos.

The walk took us along some snow and ice covered parts (and I even slipped and fell at one point coming back!). The lake was gigantic and was nestled right up with the snow on the mountains. It was very serene and peaceful as well. The weather wasn’t too bad, slightly chilly with a light breeze, but not nearly as cold as I had expected. We spent some time hanging around and enjoying the view before heading back to the bus. 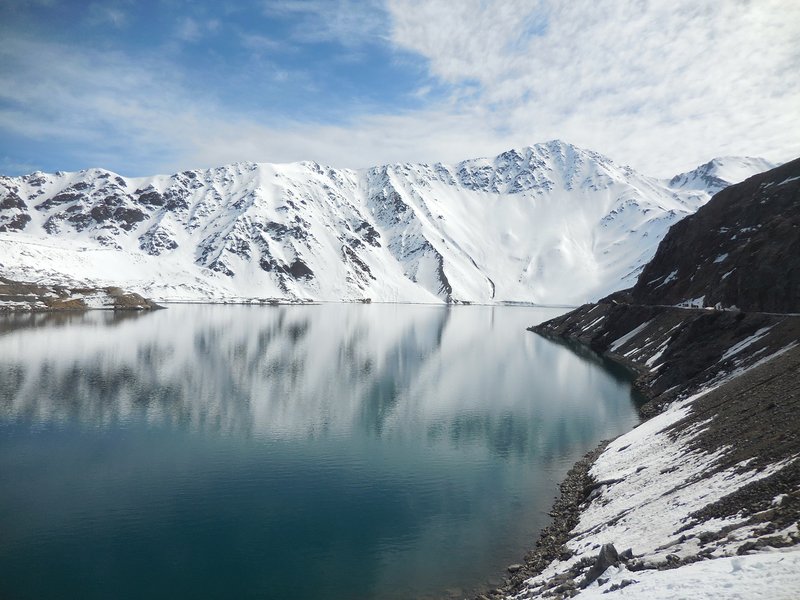 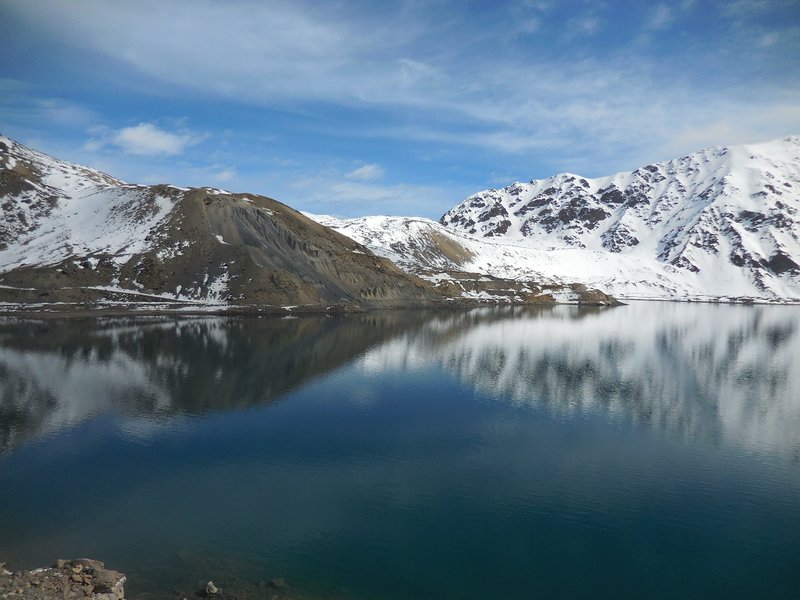 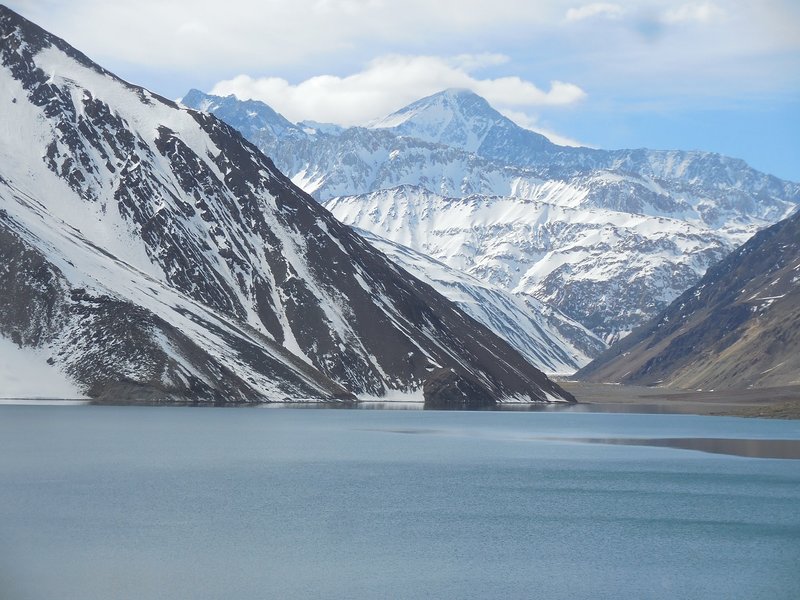 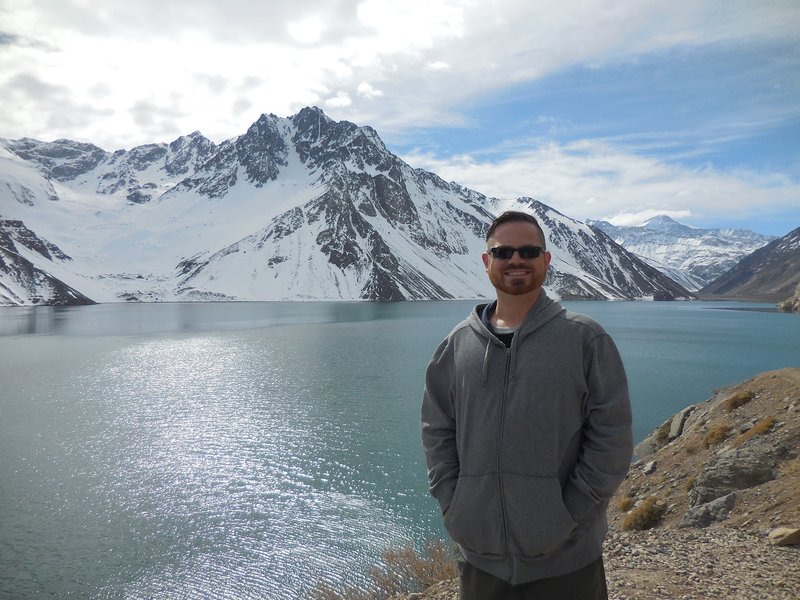 We drove part of the way down the mountains before pulling over near a small stream to have our wine and snack. The snack consisted of two types of cheese; chocolates; bread with avocado, dulce de leche, and a local Chilean green sauce. We also had the two bottles of local red wine. 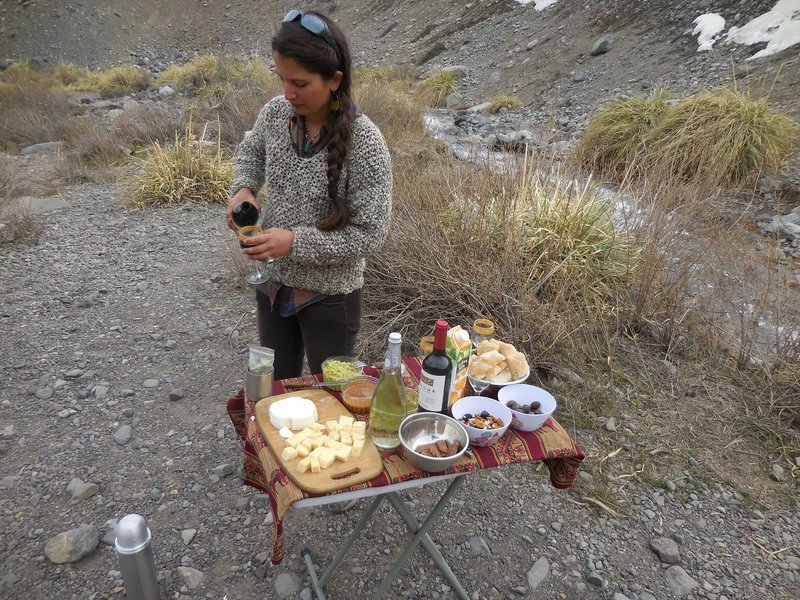 I tried everything: both wines were quite good, the avocado was amazing, and even the green sauce was tasty. I was also a fan of the dulce de leche, but the other Ryan didn’t care for it at all. During our break along the stream we saw three condors flying around the mountain tops and they eventually descended and got quite close to where we were sitting. 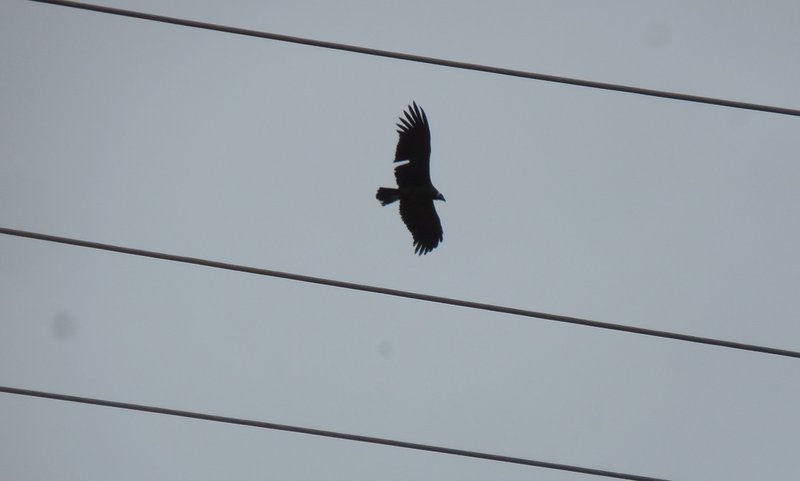 Before leaving we took a group photo: 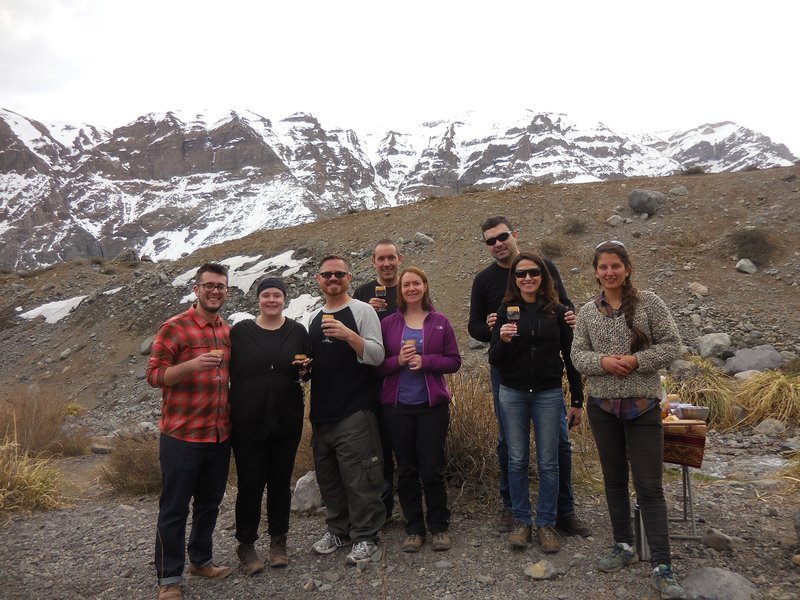 Along the drive back we made one last stop at a local restaurant for some local beer and empanadas. I had one with beef, cheese, onions, and a boiled egg. It was delicious! 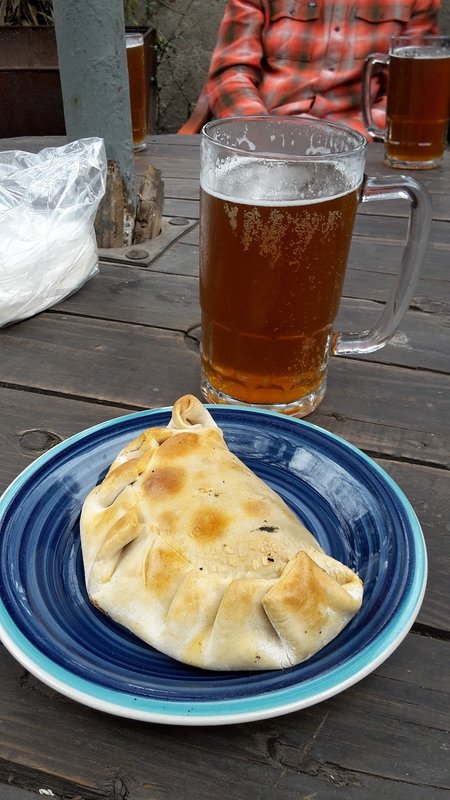 Sarah and I teased Ryan about the beer because he wasn’t a fan of beer in general. He had one though and even finished it too! During most of the drive back from the dam I had spent time chatting with them both, getting to know them better. Finally, I asked them if they had plans for the evening and if they’d like to grab a drink. They said yes and invited me over to their hotel: they had bought some beer and Pisco the night before and we planned to drink that.

We reached the city and their hotel shortly after 18:00. Our first order of action was to find ice for our drinks; Ryan and I searched the entire floor and could not find the ice machine (this despite the fact that the hotel provided an ice bucket in the room). We decided to just have our Pisco with Coke (what the Chileans call “Piscola”). The Pisco smelled like Tequila, but when mixed with Coke it tasted just like a rum and Coke. Ryan and I had a couple of those to drink; the second (or third) that he made for me was quite strong as he was determined to finish off the huge bottle of Pisco before they headed back to the States the following evening.

I was strongly flirting with Ryan during the evening – I had been correct earlier when I thought that he was gay. He was somewhat shy and quiet, but would smile and blush a lot (plus he has a very cute, a VERY slight stutter that was adorable).

We also had some instant coffee to help us all wake up at this point; it was some help. Around 21:30 we decided to head out and grab a bite to eat. I was going to take them back to the restaurant that I ate lunch at the day before, but since it was so far away, we went to a local place near the hotel. I’ve no idea what food we ordered, but it was like a stew that was spicy and served with bread. 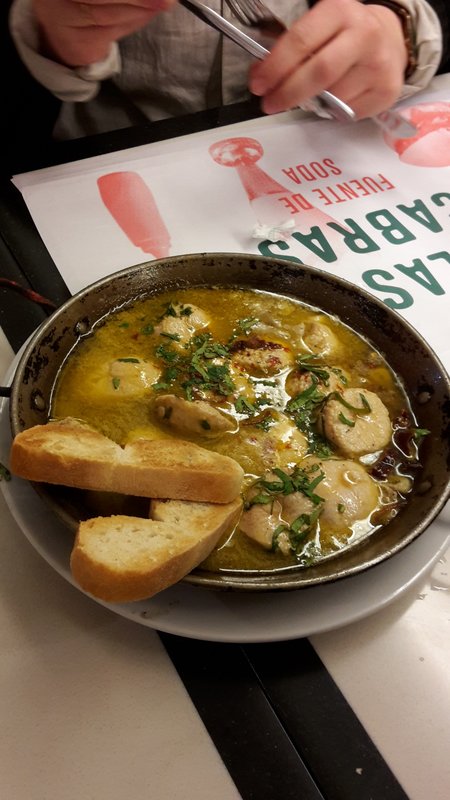 Sarah and Ryan each had a Chilean Pisco Sour while I had a Chilean beer with the meal. Ryan and I sat next to one another and I asked Sarah to take a few pictures of us. Ryan reached over to put his hand on my leg, which he seemed nervous to do at first, but I told him it was ok. LOL 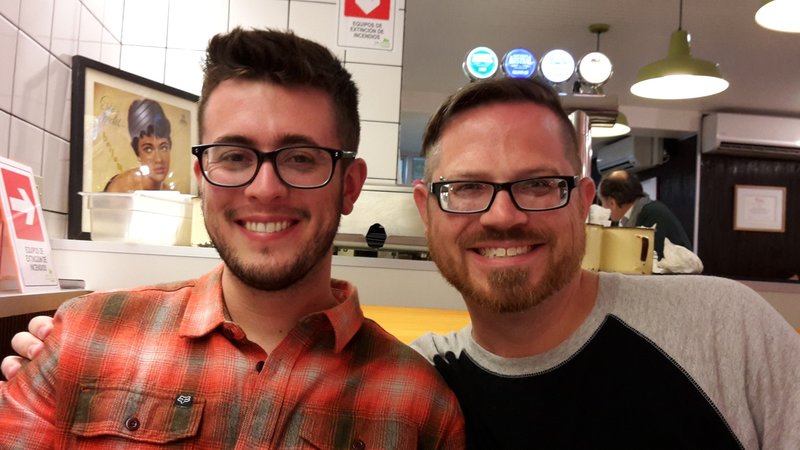 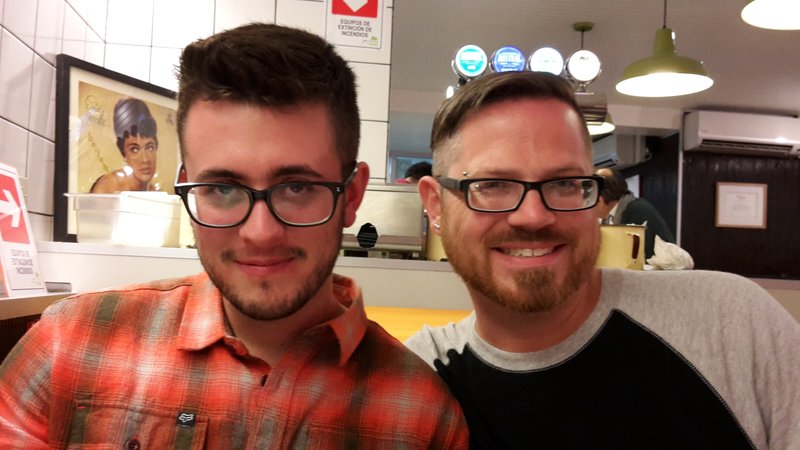 After finishing our food, we headed back towards the hotel. There was a Wendy’s nearby and Ryan wanted some fries, but we arrived right as they were closing and thus couldn’t get anything. Back in the hotel we had one last drink. Sarah went to take a quick shower, leaving Ryan and me together alone – finally! We chatting for a couple minutes and then we just made out for a little while (and he's a great kisser!). It was fantastic and the perfect way to end the day!

By this point it was nearing 23:30 and I needed to head back to my hotel. After saying goodbye to Sarah, Ryan walked me to the elevator and we spent a minute making out some more before I had to leave. The walk back to the hotel was quick, only about 15 minutes. There were many people on the street and I felt quite safe (we were also staying in the safest part of the city, which helps). After getting back to my room, I sent Ryan a quick text and then called my friend Jake in Seattle (via Google Hangouts). We chatted for a while and I told him all about the amazing day I’d had, especially with Ryan. I finally went to bed around 2am (Chile started Daylight Savings Time at midnight, so the clocks had jumped ahead by an hour).

It was an amazing day, especially getting to meet and hang out with Ryan. It was an unexpected highlight of my time here in Santiago. I never expected to meet someone who I'd get to spend such a great time with, let alone someone with whom we'd develop a mutual attraction. It was also nice to make new friends. I really hope that I'm able to see Ryan again once I get back to the States!! :-)

This morning I’ve spent hanging around the hotel, packing and getting ready to fly out to Asuncion, Paraguay today!

Posted by Glichez 06:32 Archived in Chile