It's delightful, down in Chile

Yesterday was another long travel day as I headed from Puerto Iguacu to Santiago. My flight was not until 13:45, so I spent the morning relaxing at the hotel and reading by the pool. I've been so busy over the past week and I needed the time for relaxation. I was somewhat worried about the airport transfer that I had arranged: they never reconfirmed the pickup time and I had tried contacting them several times. Thankfully they arrived on time and I arrived at the airport in plenty of time.

My flight plans for the day involved a layover in Buenos Aires, where I would have to transfer airports (from AEP to EZE), which I wasn't really looking forward to having to deal with. However, the gentleman at the check-in counter managed to change my flights so I no longer had to change airports - and the new flight arrived 15 minutes earlier than the one I was originally booked on! The airport at Puerto Iguacu was very small, with only a few gates.

The flight to Buenos Aires was quick and smooth; they served a light snack of sweets that was quite delicious. Upon landing I stopped to grab a bite to eat for lunch at the small food court located just outside of the international departures area. I am glad that I decided to eat there rather than going through the international security: there was no food service beyond that! I had a 5 hour layover and we finally left for Santiago around 20:20. Again, a rather uneventful flight, arriving in Santiago around 21:45.

I had arranged my transfer to the hotel before leaving the States, but I was unprepared for the chaos that was the Santiago airport. The shuttle company had a fleet of shuttles constantly going to different parts of the city, with a central dispatcher coordinating everything from curbside. I had to wait a few minutes for a driver to arrive that was going to the Provedencia area (where my hotel is located). I finally arrived at the hotel around 23:00 and was exhausted. I checked in and went right to sleep.

Today I had two walking tours of Santiago, both arranged through the local company Tours 4 Tips. I had to take the metro (subway) from my hotel to the tour meeting point. The metro itself was straightforward, as any metro is, but buying a ticket was slightly confusing. The is a fixed price for a ticket, no matter how far you are riding the metro; the price changes depending on the time of day. There is a lighted sign at most stations that notifies you what fare is currently in effect: high, medium, or low (the color on the tickets correspond to these sings). 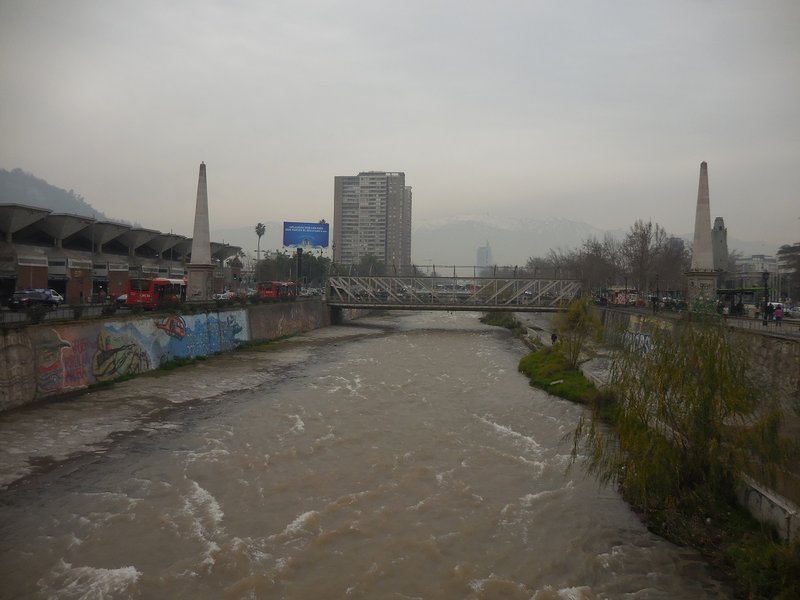 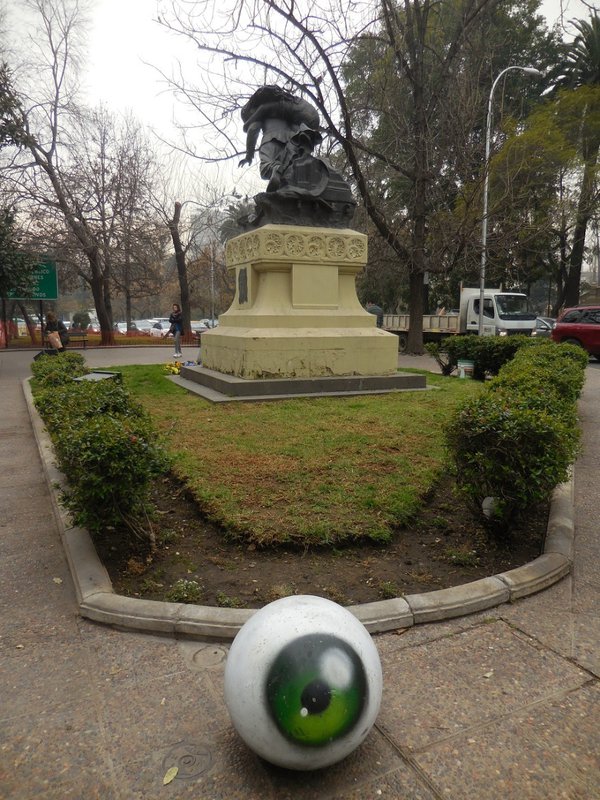 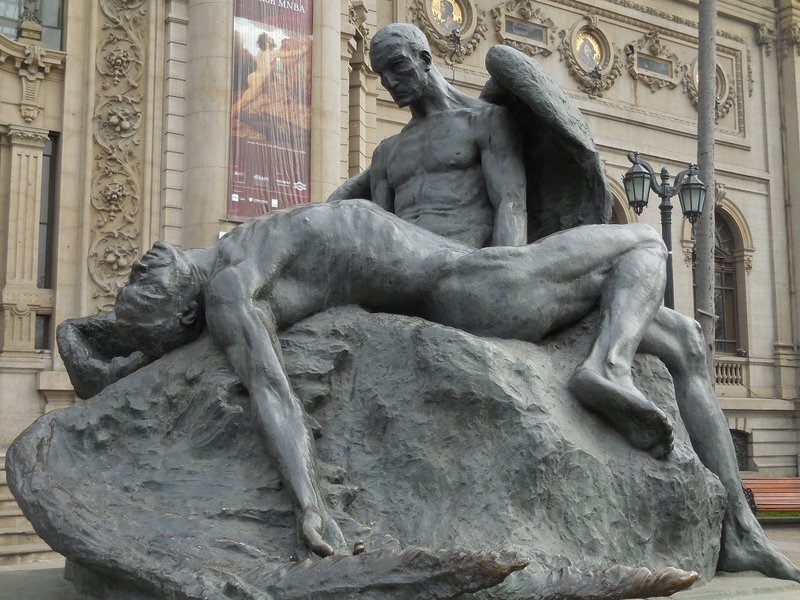 The first tour was the "Santiago Offbeat" tour, which focused on the local life of the city. Among those on the trip was a couple from San Diego and a young guy from Atlanta. We began by strolling through several local markets that are hot spots for locals. There were specific markets for different types of goods: fish, flowers, meat, vegetables, etc. Within each market were numerous little restaurants, often with only a handful of tables. The people were friendly, welcoming and it was very nice getting to walk around and enjoy the "real" Santiago. 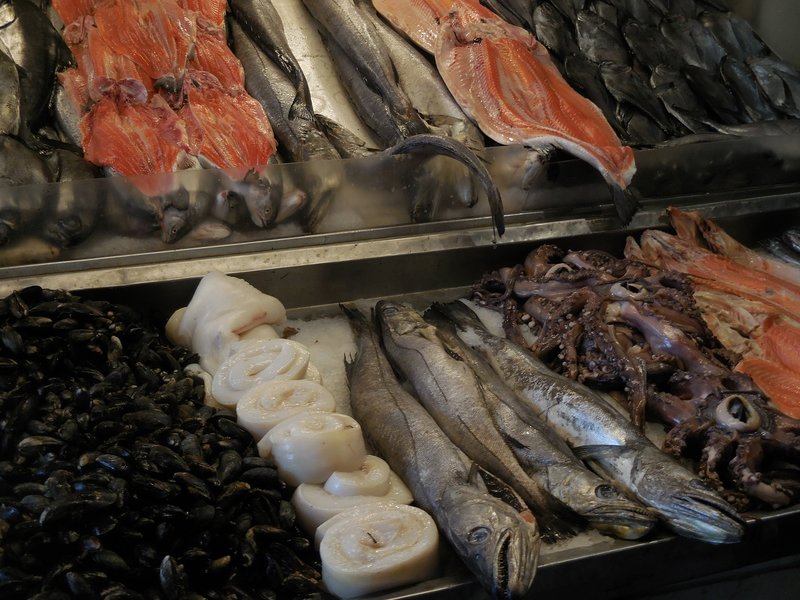 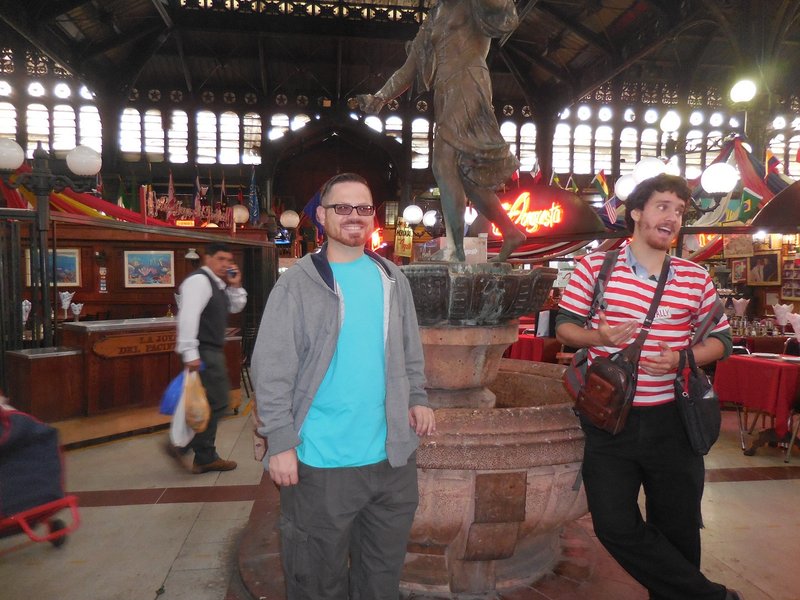 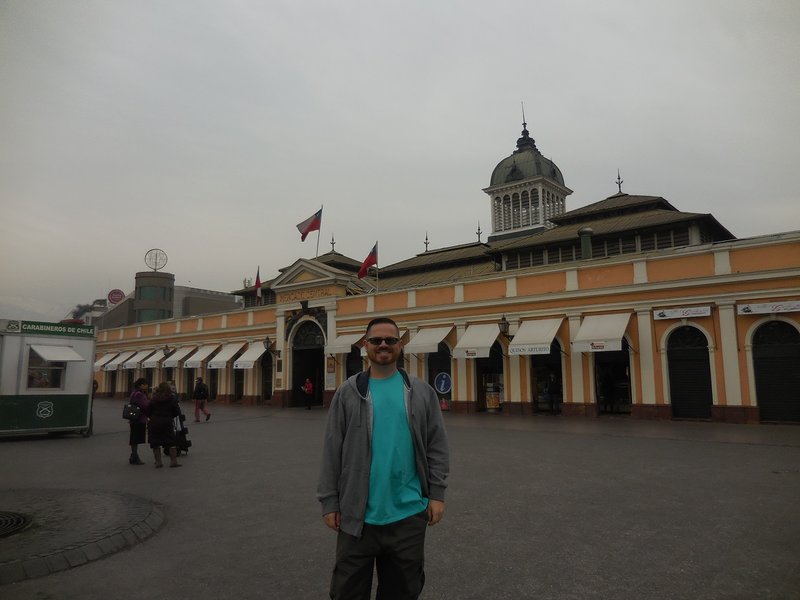 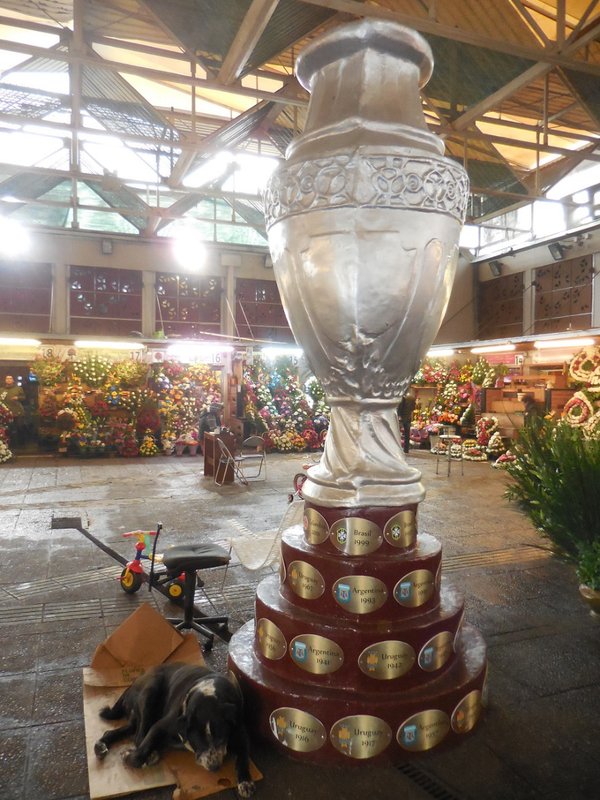 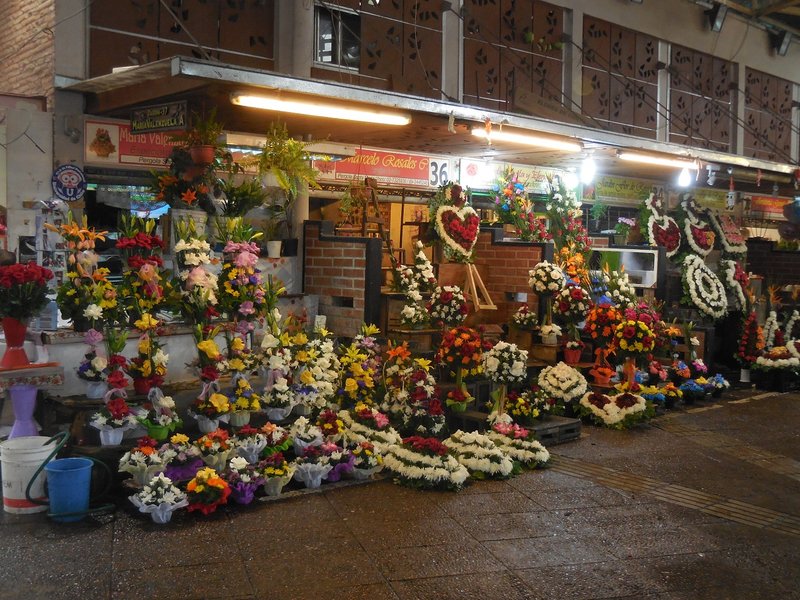 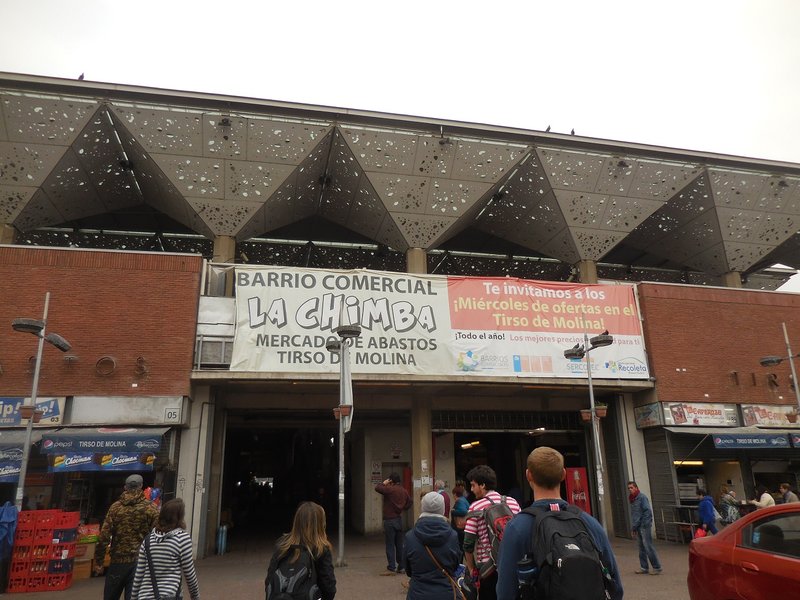 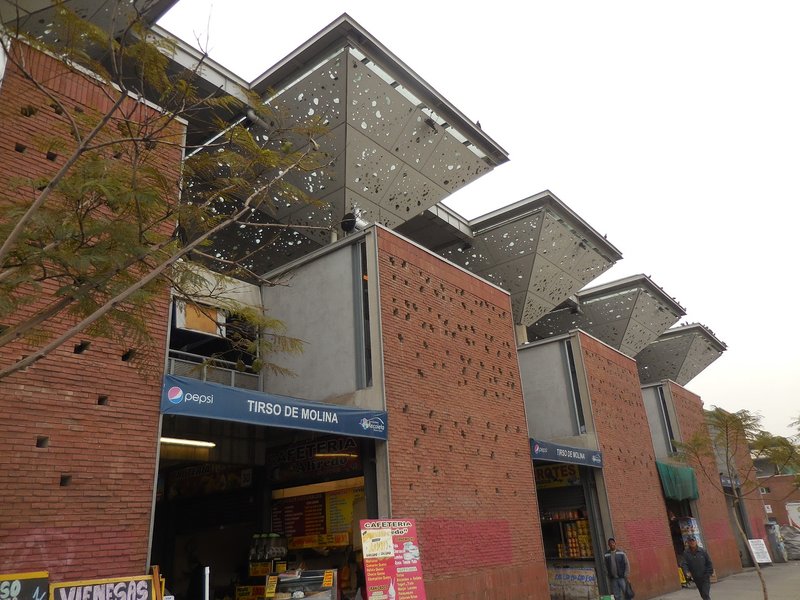 Along the way we stopped and had a quite bite to eat from one of the many street vendors. We had a sopapilla with sweet ketchup and a local sauce which was quite delicious. Our next stop had us take the metro up to the cemetery where we explored and were told about the burial practices here in Santiago. Everyone is buried in niches throughout the cemetery and the families either rent or buy them and often use them for several bodies (the most bodies in one is currently 12). 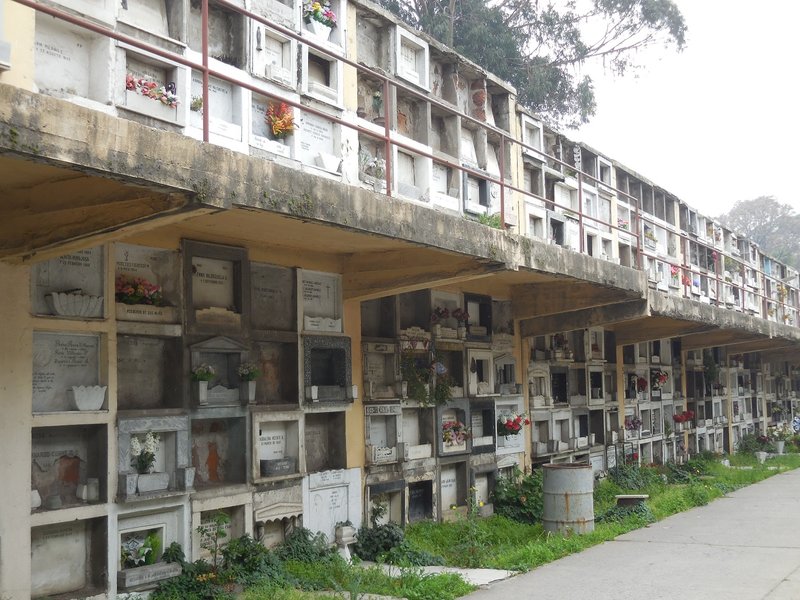 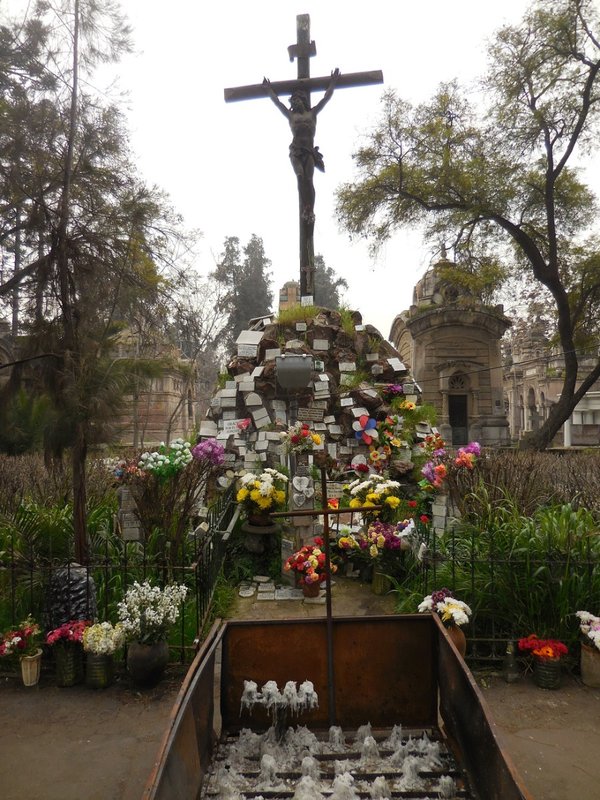 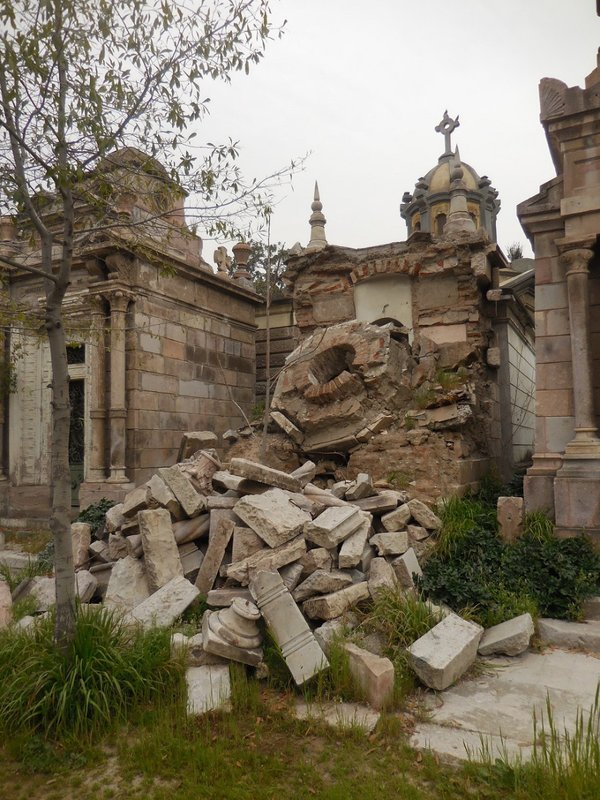 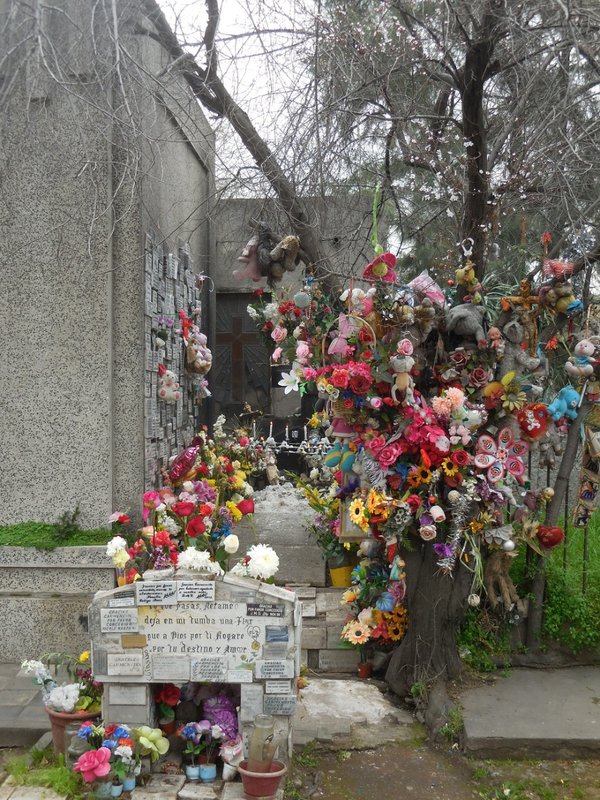 We made a lengthy stop near the grave of former president Salvador Allende, who was overthrown in September 1973 by Pinochet. At this stop we were given a very objective retelling of the events that happened during the coup that brought Pinochet to power, along with the conditions of his 17-year dictatorship. The guide explained that opinions on Pinochet are still heavily divided between those people who only experienced the benefits of his rule and those who suffered. 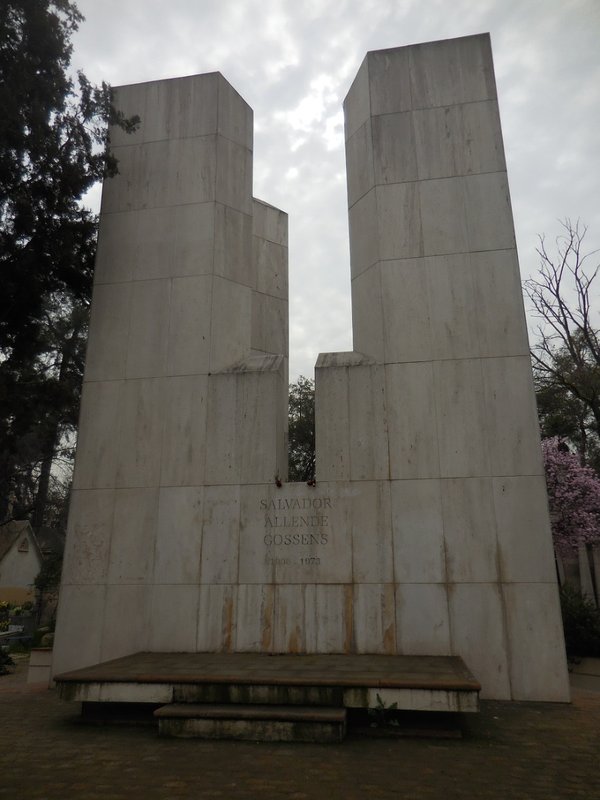 The final stop took us to a local bar where we were treated to the Terremoto Drink (Earthquake Drink): sweet wine, grenadine, and pineapple ice cream. It was rather good and I was one of the few people to have seconds on the drink. By this time it was 13:30 and the next tour started in 90 minutes. After saying goodbye to the guide and tipping him well (he was a fantastic guide!), I made my way back to the metro. The guy from Atlanta joined me and we chatted for quite a bit; he exited the metro to head back to the markets while I continued on to the area around the meeting point.

I decided to grab a bite to eat before the tour and stopped in a small restaurant. I ordered Chorrillana, which is a dish of sliced beef and onions, served over fries and topped with two fried eggs. Needless to say, the food was delicious! 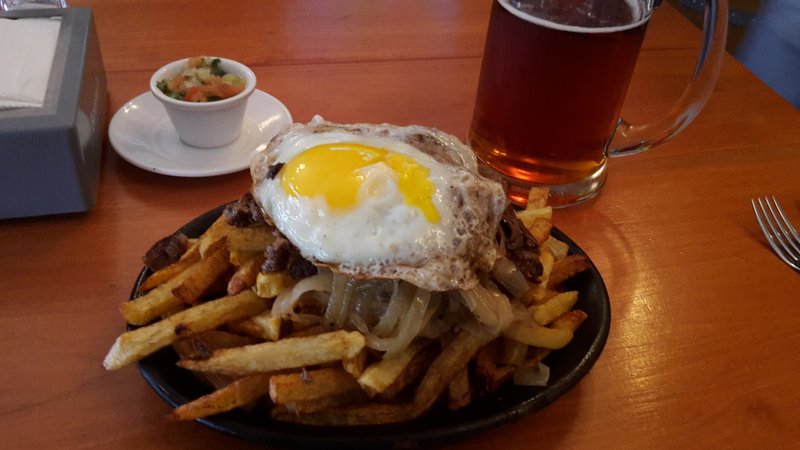 I had local beer with my lunch as well. I asked the waited to make a suggestion and he brought me a very good Kuntsmann beer, of which I had two with my meal. 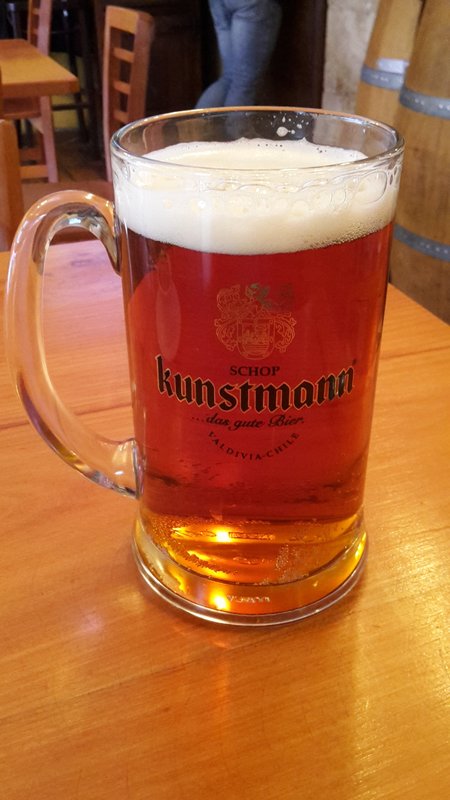 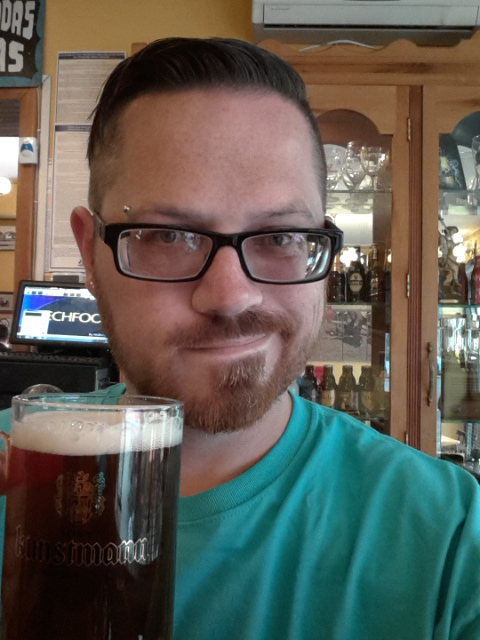 Speaking of the waiter, he was most definitely giving me flirty eyes during the entire time I was there. He even winked at me at one point - and it was a very flirty wink. He was very cute (the first cute guy from South American that I've seen so far) and I wish we'd been able to actually chat. Sadly, he spoke no English and my Spanish was too shitty for us to have any real conversation. Ok, let's be honest, my Spanish is just fucking awful. LOL

By this point it was time for the second tour, the Santiago Highlights tour.

This tour focused on the main sights of the city, of which there are but a few. Again the guide was outstanding and provided some awesome commentary throughout the tour. We first stopped by where the military once head its headquarters during the Pinochet years, which was also the location that Allende hosted a UN convention just prior to being overthrown.

One particular point of interest was a set of door handles of two fists. Originally, under Allende, they were pointed up in the sign of solidarity and defiance. Under Pinochet they were turned upside down and looked as though they were handcuffed. Now they have been restored to their original setting. 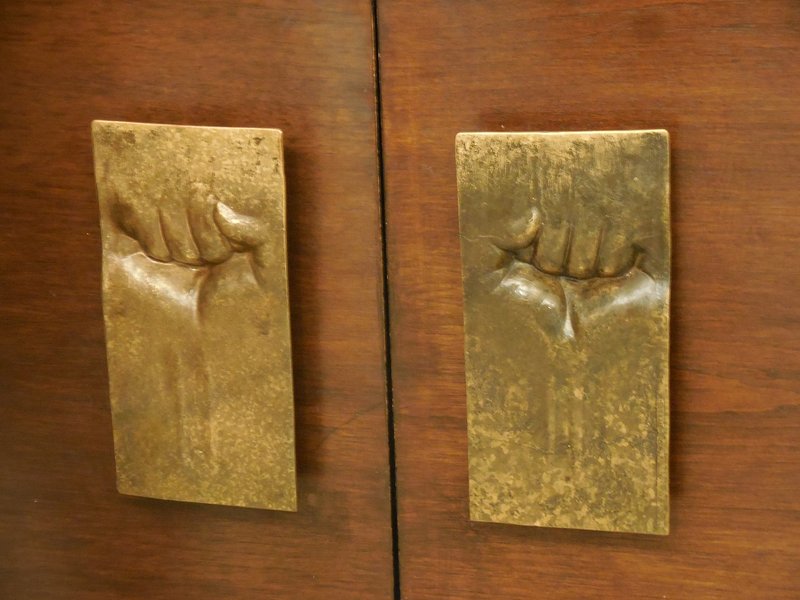 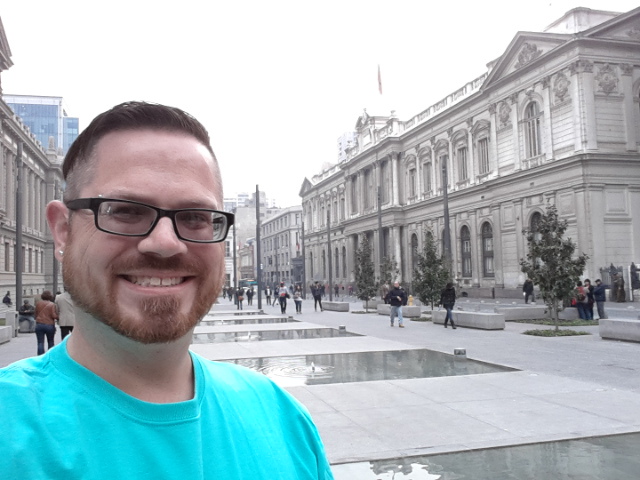 Our next stop was La Moneda, the presidential palace. This was the location that Pinochet had bombed during the 1973 coup and where Allende made his last stand (and later committed suicide). The palace has been restored and continues to serve as the presidential palace. In the same square was a statue that had a bullet lodged in its cheek from the day of the coup. Another fun fact: the mobile game Pokemon Go had recently made the square a hot spot and thus it was filled with people on their phones playing the game! 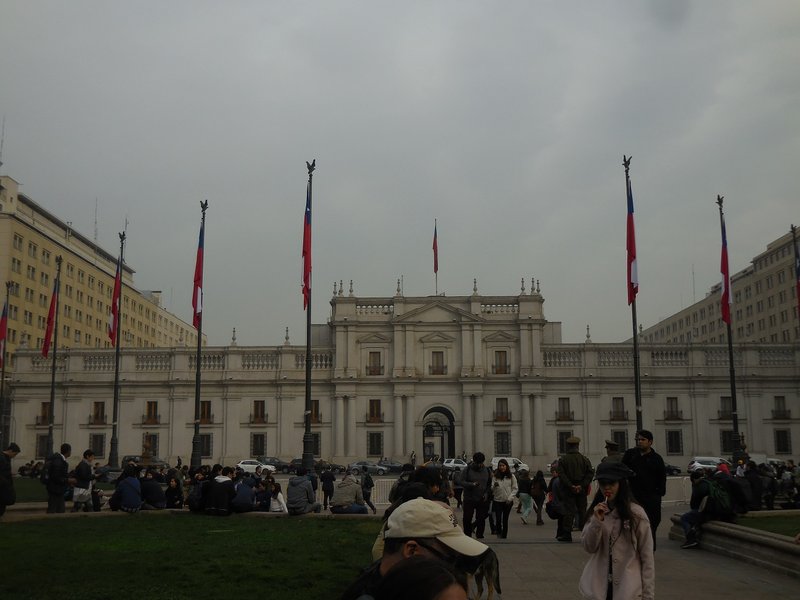 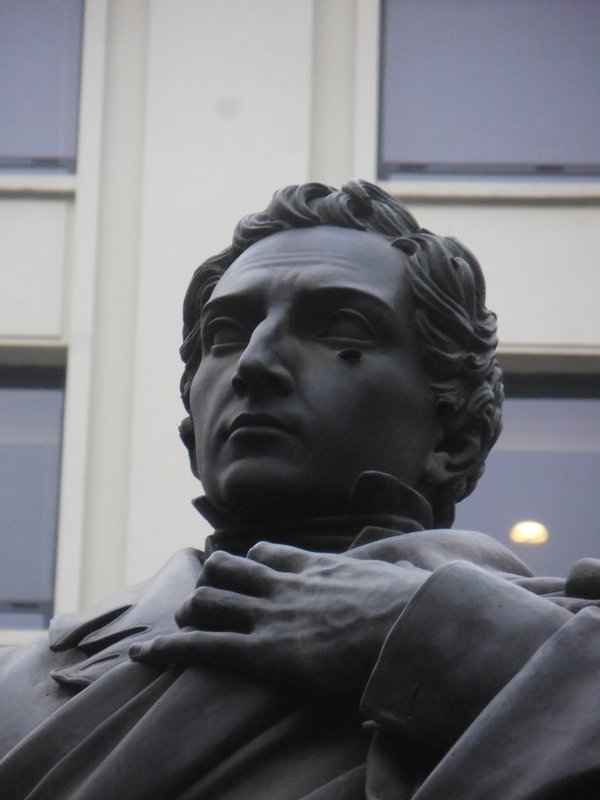 We headed to the Plaza de Armas, which is a massive square filled with people, many of them selling their goods along the sidewalk. 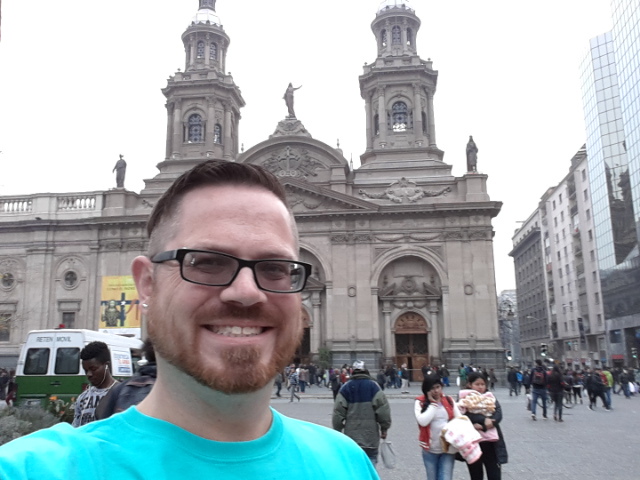 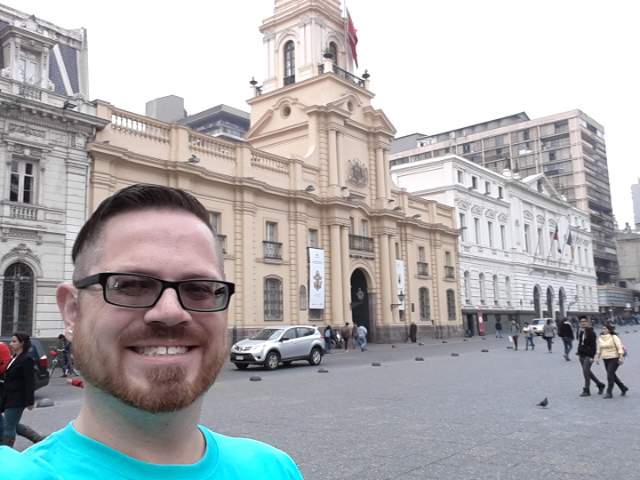 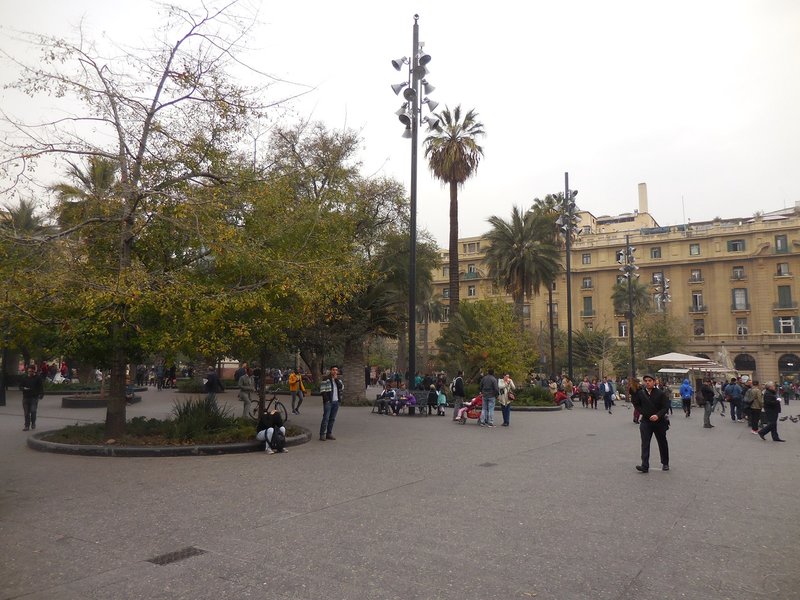 Our final stop took us to the Belles Arts metro station where there were two amazing murals painted on the sides of the buildings around it. 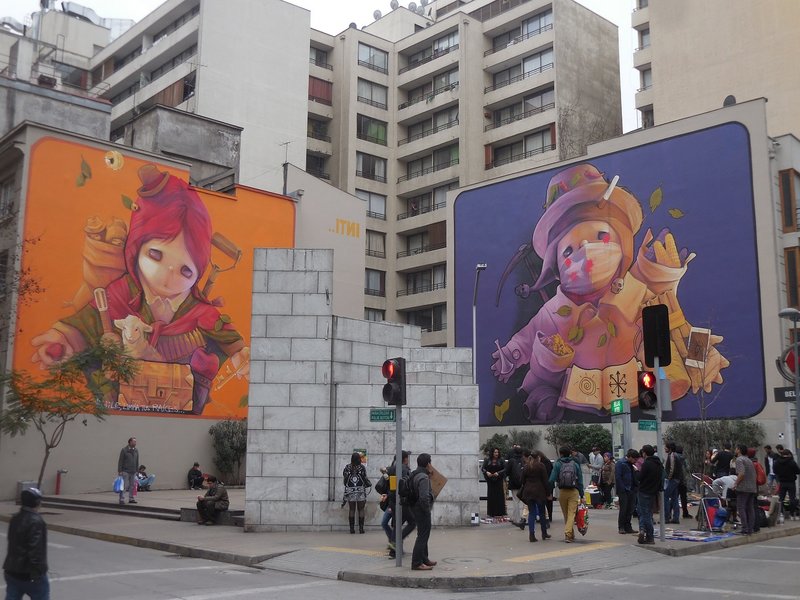 I headed back to my hotel after the tour and went to grab a drink in the bar downstairs. I had received a complimentary drink voucher when I checked in and decided to have a Pisco Sour, a local drink. The waiter seemed surprised that I would want the drink since I'd never had it before. However I found the drink very pleasant! It was indeed quite sour, but refreshing at the same time. 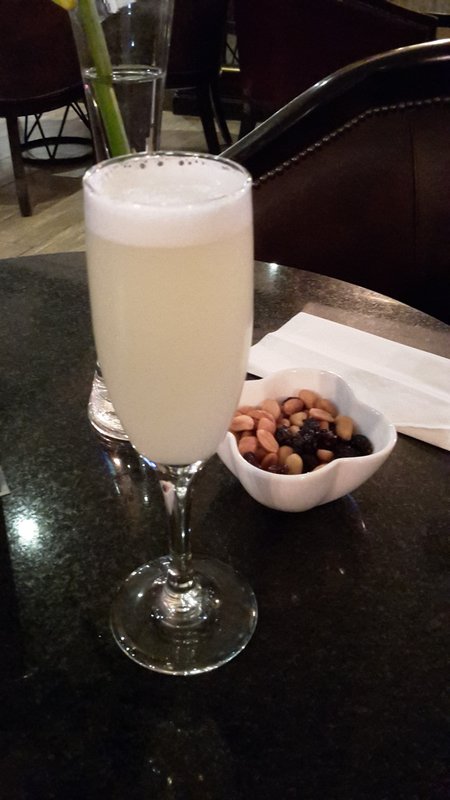 Posted by Glichez 17:34 Archived in Chile